When we moved into this flat, I spent rather more money than I could properly afford on getting some pictures framed. They were an eclectic collection: a screen-printed poster from one of the artists in the Brighton arcades; a photograph of my godmother; a honeymoon Montmartre drawing and a watercolour landscape; three photographs that I’d taken myself. That morning at the picture framer’s, searching through all the frames and mounts to find the ones that made the pictures sing – a ridged wood frame to echo the back platform of the bus, a gold edge to bring out the warmth of the red crayon, three different mounts for my three different photographs, with identical silver frames to tie them together – was enjoyable and enlightening. I’d never realised how much there was to it.

It took me a while to get around to getting some picture hooks. The first chapter of Fair Play stuck in my mind:

Jonna had a happy habit of waking each morning as if to a new life, which stretched before her straight through to evening, clean, untouched, rarely shadowed by yesterday’s worries and mistakes.

Another habit – or rather a gift, equally surprising – was her flood of unexpected and spontaneous ideas. Each lived and blossomed powerfully for a time until suddenly swept away by a new impulse demanding its own undeniable space. Like now this business about the frames. Several months earlier, Jonna had decided she wanted to frame some of the pictures by fellow artists that Mari had on her walls. She made some very pretty frames, but when they were ready to hang, Jonna was seized by new ideas and the pictures were left standing around on the floor.

“For the time being,” Jonna said. “And for that matter, your whole collection needs rehanging, top to bottom. It’s hopelessly conventional.” Mari waited and said nothing. In fact, it felt good having things unfinished, a little as if she had just moved in and didn’t have to take the thing so seriously.

This is perhaps my favourite library discard of all time. In my teens I didn’t quite read it cover to cover (the last section is a catalogue of pretty much every opera ever written, and even I wasn’t quite that obsessed) but I spent many hours with it. It’s irreverent, gossipy, informative, and very funny.

Without a good supply of breath there can, of course, be no singing at all. As an example of the sort of supply that can be developed, there is the famous story by an eyewitness of the bass Lablache (1794-1858). At dinner one day he “sang a long note from piano to forte and back to piano; then drank a glass of wine without having breathed; then sang a chromatic scale up the octave in trills, still in the same breath; and finally blew out a candle with his mouth open.” Needless to say, few singers today can emulate the feat.

I don’t have nearly as many orange Penguin paperbacks as I’d imagined I did. The ones in my head come from my childhood; I’ve had to buy my own copies in newer editions. I did end up with most of the Agatha Christies, but those are green, of course. I’ve already used most of the orange Penguins I do have. So here’s the next best thing. And an orange. 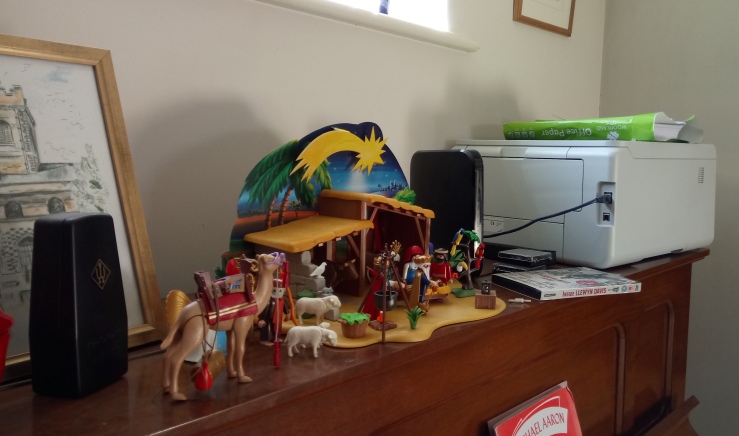 For me, the new year came in with a whimper, not with a bang. I was in bed long before the bangs started, knocked flat by this virus that everyone’s been getting. And it’s taken me a while to get up and running. There’s a lot to catch up with, or, at least, there could be, if I were thinking in terms of needing to catch up with things.

The crib should have gone away. It didn’t. It’s going to have to stay up until Candlemas now, and for once the Magi get to stay by the manger for more than a day. (The parrots were a present from a friend, who’d seen this crib and got ideas about how to improve mine.)

The snag is the usual one. I am scared of reading it because I am worried that I will come across a problem that is unfixable. Perhaps I have failed to do some essential bit of research and have made a mistake that’s going to kill the whole plot. Perhaps I have managed to be unintentionally yet monumentally offensive. It’s always a variation on one of those two. Perhaps. Perhaps. Perhaps.

There are two potential ways to deal with this. The first is to wait it out. I’ve lived with myself long enough to know that I do get things finished, eventually, and that if the book and I want to spend two months hiding for each other then perhaps that’s just what we need to do, and we’ll find each other in good time. The second is to get somebody else to read it for me. Sooner or later I would anyway, but this is a much earlier stage in the process, and I find myself reluctant to pass it out before it’s as good as I can get it unaided.

At the moment, while I’m still getting over this illness and blessed with a contented lack of urgency, I’m going with the first option. I spent far too much of last year worrying that I hadn’t done enough, that I wasn’t writing fast enough, and, now that feeling’s a long way off, I’m going to enjoy its absence. The book can wait. 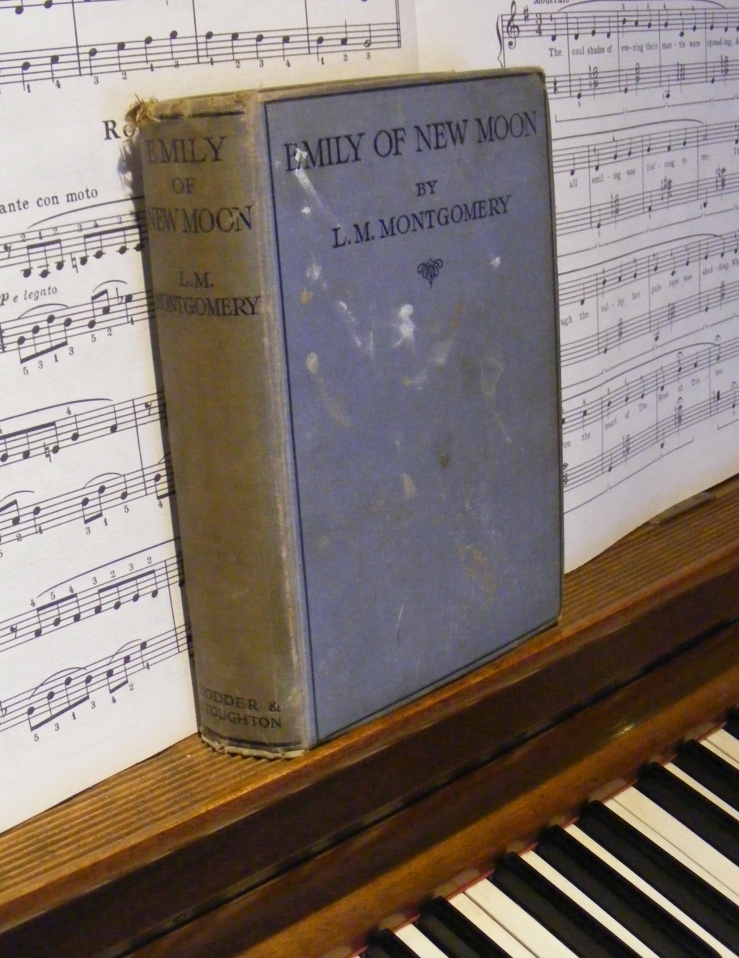 I nearly used this for ‘stars’, but ‘moon’ works just as well.

Here’s a meme that’s been annoying me:

I have never written any blue curtains, so I can’t comment on those. In fact, I think I’ve only written two pairs of curtains, and specified the colour of one of those pairs. They were yellow.

This is what my English teacher told me:

Every word on that page is there because the author wanted it to be there.

The curtains are only in the book at all because the author wanted them to be there. If they described every item of furniture, every fixture and fitting, in a room, then the reader would die of boredom long before any action could begin. Instead, the author has to trust that the reader will fill in the background details subconsciously. This can cause problems for someone trying to convert a textual work into a visual one. In fact, it’s called the Jane Austen’s curtains problem.

Given that, why mention the curtains at all? Why make them blue, if not some other colour? There’s probably a reason, and it’s worth thinking about what it might be.

Colette’s room looked out over the back garden, down towards the railway and across the town. The terraces ran in neat russet lines down the hill; on the other side of the river, the beech trees in the park were vivid amber, and the yellow-grey stone of the old town glowed gold in the October light.

‘Wow,’ Lydia said, ‘you get a lovely view of the cathedral from here.’

‘I know; I’m very lucky. It’s my reward for having the smallest bedroom.’

The window was open, a cool breeze stirring the yellow curtains. Down in the garden they could hear Peter bellowing, ‘Fa-ac me-e te-e-cu-um plangere!’ as he put his laundry up on the clothesline.

When I gave Colette a pair of yellow curtains – and, almost more importantly, when I didn’t take them out again during editing – there were various things in my mind.

I don’t have a particularly visual imagination, and find that inventing objects doesn’t come naturally to me. Consequently, I do tend to appropriate real life objects. The horrible red leather sofa at Balton Street, for example, is real; it was an eyesore in a university friend’s flat. Colette’s curtains belonged to one of my own housemates. (No, that doesn’t mean that she’s the model for Colette. If it comes to that, the friend with the red leather sofa is nothing like anybody at Balton Street.)

In the Church (not Lydia’s church, but she doesn’t need to know this) yellow equals gold equals white: the colour of rejoicing, the colour for feasts, for Christmas and Easter, for weddings and baptisms. In most of the rest of the book the dominant colour is purple. Partly because I like purple, yes, but partly because it’s associated with waiting, penitence, mourning, fasting. Colette, the out bisexual character, could very well have purple curtains. But she doesn’t. She isn’t waiting or penitent or mourning or fasting at the moment, though she’ll do all of those things over the course of the book. She’s content in who and what she is in a way that Lydia can’t understand yet. And the curtains are yellow.

Did I do all that consciously, deliberately? I doubt it, at least in the first draft. As best I can remember, my thought process went something like:

looking out of the window – oh, better have some curtains, then – any particular curtains? – A’s curtains – yellow curtains

That’s not really the point. The point is that they remained yellow. This mention of yellow was a lot less deliberate than any mention of purple, but I kept it because it worked.

Later, when Lydia recalls the incident, the curtains are mentioned again, but their colour isn’t:

And the clear autumn breeze lifting the hem of the curtain, and Peter singing in the garden, and her soul standing on the threshold of its self-made prison, not yet ready to step out, but knowing for the first time that there was a world outside it.

Because their colour isn’t relevant here. The point now is that the window’s open.

It’s always worth thinking about the curtains.

And this approach goes for any detail. Why is Peter singing that particular line? Because it’s a lot of fun to sing, and I know that because I’ve sung tenor in the Dvorak Stabat Mater myself. Because it does sound a bit dirty if you don’t immediately realise that it’s not in English, and this scene needed to go a little way beyond Lydia’s comfort zone.

One could also say that the meaning of the Latin is relevant. Make me weep with you. The speaker is asking to enter more fully into the suffering of Mary, the Mother of God, and there is certainly a sense in which the book is about expanding one’s spiritual experience.

But that’s a bit of a stretch. I’m pretty sure that I wasn’t thinking of that when I put it in. So I don’t know, maybe the maker of that meme has a point after all.

Yes, the curtains were fucking yellow. But if there hadn’t been a reason for that then they wouldn’t have existed at all.

This one gets into your head.