There are two things that ‘sanctuary’ can mean, and both feel significant. Firstly, there’s the sense of safety, of being able to claim a refuge, of hanging onto the door handle of the church and invoking protection and justice.

And that comes from its older sense, of a place that is sanctified, holy, set apart. Which is more obvious, and more difficult. We’ll see where I go with it.

… a trip to the opera

… a week on the Book Bus

… a weekend in the country

… learning to teach, and enjoying it

(finding space in my faith for the fullness of myself)

… railways that got better and better

I came into this year, and in particular I went into the InterRail trip, thinking of it as the last chance to have fun before things got terrible. And who knows, it may still turn out to be that. I’ve been scared of 2019 for… well, two years. And so I was thinking of Patrick Leigh Fermor, hiking from the Netherlands to Constantinople during the rise of Nazism; I was thinking, do it now, in case you don’t have a chance later.

I wrote, on the way home,

This isn’t the end of anything. This is about understanding that it’s all mine for the enjoying, that much more is possible than I ever thought, that in fact I can have both/and.

Maybe I won’t be able to. Maybe politics or money will get in the way. Maybe I’ll be doing other things. There are many things that might stop me – but it’s less likely, now, that I’ll be one of them.

So. It sounds ridiculous now, and goodness knows what it’ll sound like in a year’s time, but thank you, 2018, for hope.

This year I’ve been playing around a bit with black and white, on the grounds that everything looks good in black and white. And it’s very easy these days to slap a filter over a colour photo.

There aren’t a huge number of photographs in which I’m actually smiling. If someone else took it, either I noticed and I’m looking horrifically awkward and hoping they’ll get on with it, or I didn’t, and I’m looking bored, or waving my hands around, or I’ve gone too far in the other direction and all you can see is gums. If I’ve taken it myself, I’m probably frowning at the screen trying to get the damn thing in focus.

But this one came out well enough, just now. New glasses, this year. New hair (though it’s retained its old trick of curling upwards at the front). Same smile.

I suspect the prompt is really looking for ‘a book you received as a gift recently’, or ‘a book you picked up in the sales’. I was given a delightful selection of books for Christmas: see the picture. I’m most impressed by my youngest brother’s having found an orange Penguin edition of Racundra’s First Cruise.

But yes, I do happen to have a new book out this year. A Spoke in the Wheel appeared in May, after a lot of wibbling about whether it was going to be as good as the last one, and has been trundling along gently ever since. It hasn’t set the world on fire, but it’s had some decent reviews. Cycling friends have found it convincing and respectful. So have disabled friends. Sometimes I think it isn’t as good as the last one. Sometimes I think it’s better. Mostly I think I did with it what I wanted to do, and that really is as good as it gets, when it comes to books. 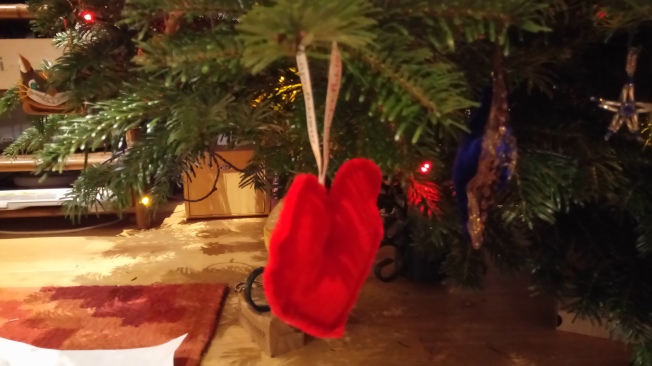 – the love to be able to recognise the humanity of everyone –

– the courage to act on humanity –

– the hope to give meaning to courage –

Be of good courage; be of good heart.

Which is a lot of remembering for three weeks, but I have almost certainly forgotten several interesting and diverting details.

A phrase that’s been floating around my head this year is the documented life. I’m not sure where it came from, or why it feels so important. It’s connected to the idea of legacy, and it seems to be partly for me and partly for other people. Like legacy, it’s haunted by the sense that perhaps it’s all a bit pointless, perhaps no one’s going to care. It is not as if I am going to end up with something like A Time of Gifts, however many exercise books I take over it.

But still, it’s fun. I stick things into albums in order to stop them hanging around the house, and I like looking back through the albums, and it’s sometimes useful to look back through my diaries. I write down as much as I can remember in order to make a note of the lessons I’ve learned for next time, and then, because it’s just annoying otherwise, to fill in the gaps in between them. 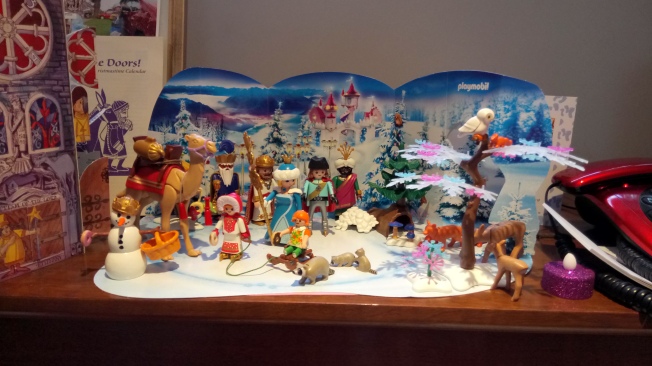 Today is…
… an intriguing mixture of the sacred and the secular;
… a large number of people in a small space;
… a party;
… for the children, and also the rest of us;
… what has been long awaited, and only the beginning of the journey.