Please post your favourite picture of yourself from 2014, self-portrait or otherwise!

One night in late June I drank an espresso martini and stayed the night with a friend who has very pale curtains in her spare room. I’d been waking up with the dawn all spring. I managed about two hours of sleep that night, but before I finally dropped off I worked out exactly what to do with my green and black dress that I’d made in 2006 or 2007, which I loved but which no longer fitted.

There had been a conversation, earlier in the evening, which included the oft-heard line, ‘Do I need to buy a hat?’ The answer, it turns out, was ‘No’ – but only on the metaphorical level. It served to remind me of a hat that I’d been hankering after for a long time – because it would go so beautifully with the dress, if only I could rescue it. And because it was completely outrageous. And because it was made by my dear friend Arnie, whom I have known since the first day of secondary school, when we met in a very cold and windy lunch break and decided that we would be each other’s friends.

I spent more on this hat than I’ve ever spent on a hat in my life. It may have been more than I’ve spent on any garment. I was angsting a little bit about this. ‘I’m spending all my money on hats. Not even hats. A hat.’

‘The singular is important,’ Tony said. ‘It proves that this is a significant hat.’

And this is true. It is not just a hat. It is art. I have been thinking a lot this year about art, and about how it deserves to be paid for. I need to value other people’s art, and my own.

I bought the hat. I bought some black velvet and replaced the bodice on the dress. I made a set of jewellery to go with them. I got new glasses this year, too; it took me a while to get used to the (comparatively) huge frames, which made me feel like Woody Allen for the first few weeks, but I love them now.

This is how it turned out: 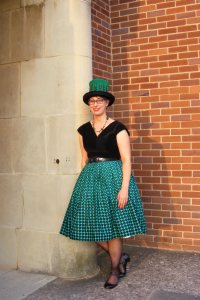 This photo was taken at Nicky’s wedding, which was an excellent day. I did wear the same ensemble to Arnie’s own wedding, but because I got changed behind a car door in between the toasts and putting up a tent (long story) I never got around to getting a good photo. Or to putting my nail varnish on, if it comes to that. Anyway, I love the September evening light in this particular shot. It was a very happy summer.