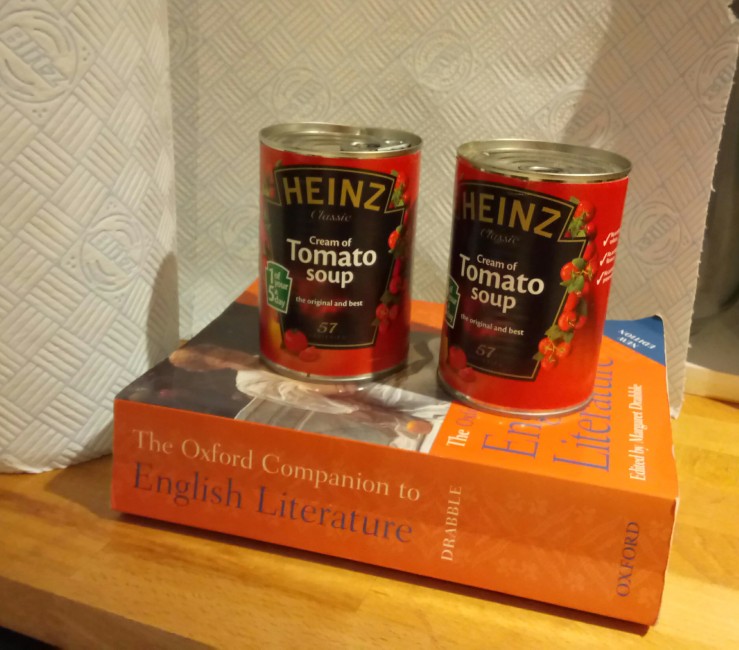 Three and a half kilograms. I’m practising for the Camino Inglés by gradually increasing the weight I carry with me when I’m out walking. That was today’s load, and the first time I’d been out with the rucksack I bought at university, which I’ve never taken on a long walk. Previously I’ve used my godmother’s rucksack, which alas is no longer in a usable state. (If anyone reading this has ever experimented with re-waterproofing the inside of a rucksack, I’d love to hear about your experience!)

There are other bits of kit on my mind: sleeping bag; socks; sticks. Do I buy new walking poles (I have no idea what’s happened to my old ones) or do I take the more picturesque but less foldable hazel staff? But the question I really need to think about at the moment is: boots? Do I use my old ones, veterans of my university years, and trust they won’t fall apart on me? Do I use the current ones, which were meant to be a stopgap and feel a bit insubstantial, and trust they won’t fall apart on me? Or do I buy a new pair? If I’m going to do that, I need to do it soon, so that I have a chance to walk them in.

At the beginning of April I’m going to spend a long weekend walking the Isle of Wight Coast Path, to get some practice in on gradients. We are severely lacking in hills in Cambridge; I’m currently making do with climbing the stairs to the top of the building I work in. Meanwhile, my brother, who’ll be joining me on the walk, has spent the last few months working at a ski resort and is probably disgustingly fit. He was disgustingly fit before he left, after all. I can console myself with the thought that my Spanish is probably better than his.

It’s been good to think of Spanish as training, too; it’s meant that when I’ve found it difficult to get out of bed (this winter, with the boomerang virus; this morning, with depression) I can do five minutes of Duolingo on my phone and still feel that I’m making progress. I can also take small, practical actions that don’t take much physical energy but that still need to be done.

On Thursday, for example, I booked the ferry tickets. And that’s a momentous proceeding. All my practice walks, all my Spanish learning and my dithering over boots; all that could just be in the interests of general self-improvement. But a ferry ticket, now, you can’t argue with that. It’s going to happen!