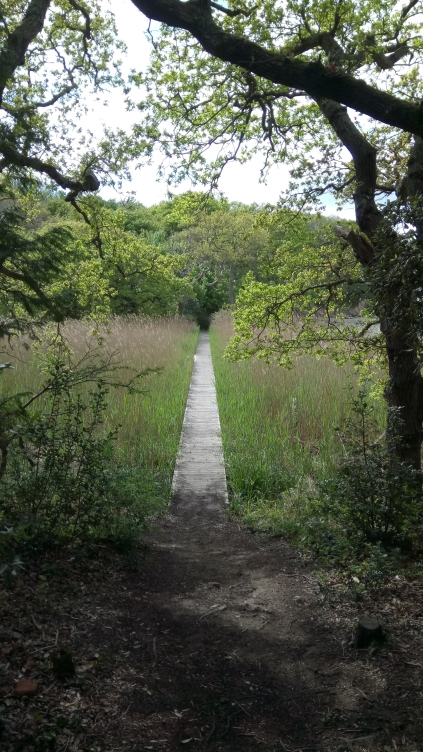 In a couple of hours I’ll be off to a wedding. Tomorrow morning I’ll be off to Plymouth to catch a ferry to Santander with my little brother, from which we’ll catch a train to Oviedo and then another train to Ferrol, and then we’ll start walking to Santiago de Compostela.

I warmed up for the Camino with an attempt at the Isle of Wight Coast Path. I’ve done this before, in six days. I think I could have managed it in the four I had available if I’d been a bit more efficient about getting out of bed and onto a bus every morning. As it was, I managed to get about three quarters of the way round, starting at Ventnor early on Saturday and giving up at Compton Bay at half past four on Tuesday afternoon.

I’m not too disappointed that I didn’t complete the circle. I did demonstrate to myself that I can sustain a sensible pace over a period of several days, I got my rucksack to settle into a comfortable position, and I reminded myself of some valuable lessons, for example:

Irritatingly, my boots – in which I can barely have walked a hundred miles since I bought them in the summer – broke in an invisible but uncomfortable manner at some point during the last day, resulting in a weird and worrying pain across the big toe of my right foot.

I didn’t work out until I was on the ferry back to the mainland that the problem wasn’t with my right foot, it was with my right boot. This is, on the whole, preferable. And if they had to break, I’m glad it was at the end of a practice walk and not mid way through the real thing. So I’ll be doing the Camino Inglés in a pair of boots that I bought in my first term at university, rather more than a decade ago. It was annoying to have to throw away what feels like a new pair, but walking boots in which one can’t walk are pretty much pointless, no matter how much they sound like one of the wonders of the Isle of Wight.

I’ll do  a full write up – of both walks – when I get back. In the meantime, the 100 untimed books posts are queued up for the next couple of weeks. I may or may not be posting on Instagram, depending on how good the wi-fi is out there. And my army of editors and specialists are reading A Spoke in the Wheel and checking for inaccuracies and infelicities. At least, I assume they are. I haven’t heard back from any of them yet, but then I did say I wasn’t going to be thinking about it until the end of May.

1 thought on “Off on Camino”