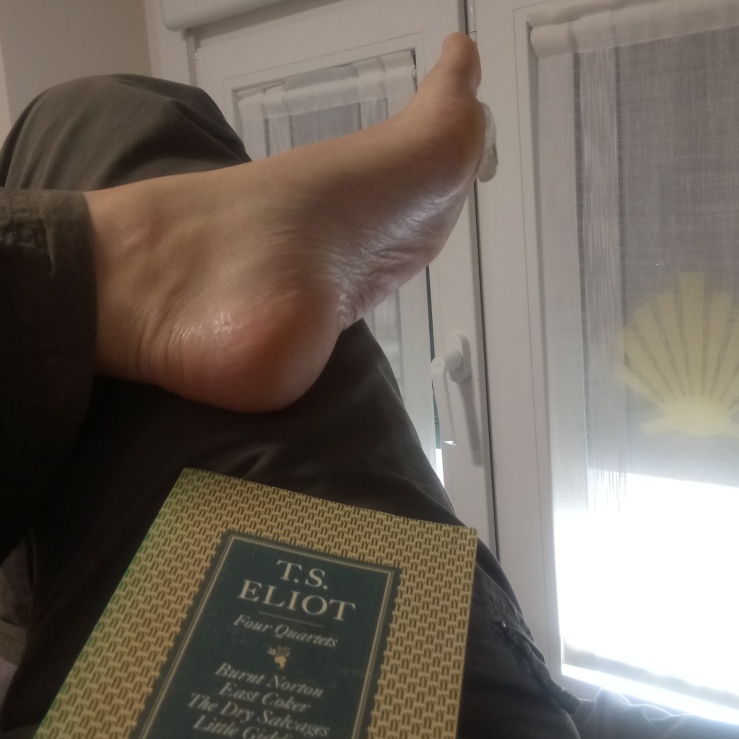 And then on New Year’s Eve I went down with the virus that was sweeping the nation. This took up most of January, on and off, during which I:

I got better. I walked a lot, working my way up to being able to do fifteen miles in a day and not . I made it to Santiago (and am still intending to write all that up). I’m still quite into Yuri!!! on Ice. (And what I really like about it is the way that it deals seriously with physical limitations and spiritual themes in a universe where there is no homophobia; I also spent this year in the Church of England, after all.) I have nearly finished A Spoke in the Wheel, and it’s still about physical ability and disability, though it’s also about burnout.

Presence ended up mostly being about physicality, but also about being a spiritual creature, about paying attention to what it’s like to exist in a body, and what it’s like to exist in time and space. Being me, here, now. Knowing what I can do and what I can’t do, and moving things between the categories. And all sorts of things seemed to come back to that. Slow travel. Being in the body that I’m in, experiencing sex and desire and love the way that I do. Blisters. Going to church when I didn’t feel like it. Pilates classes. Burnout. Depression. Sudden striking moments of awareness of the created world: unexpectedly, intensely, appreciating the taste of soup or the way the sunlight falls on the collar of someone’s coat. Frustration at having so little time that is truly my own.

The Incarnation, for me, is the most remarkable thing about Christianity: that the sacred is physical, that the physical is sacred. That’s what presence seems to be about, for me.

I don’t think that I know anything now that I didn’t know last year. Not in terms of facts, at least. (Except for a lot of figure skating terminology, and that I really do need to get some new walking boots before my next long hike.) Or perhaps that all that I have learned has gone to show how much I don’t know. I still feel that I know very little about presence, that I still have a lot to learn – but that perhaps a little has sunk in, that I’m beginning to understand about being who I am.