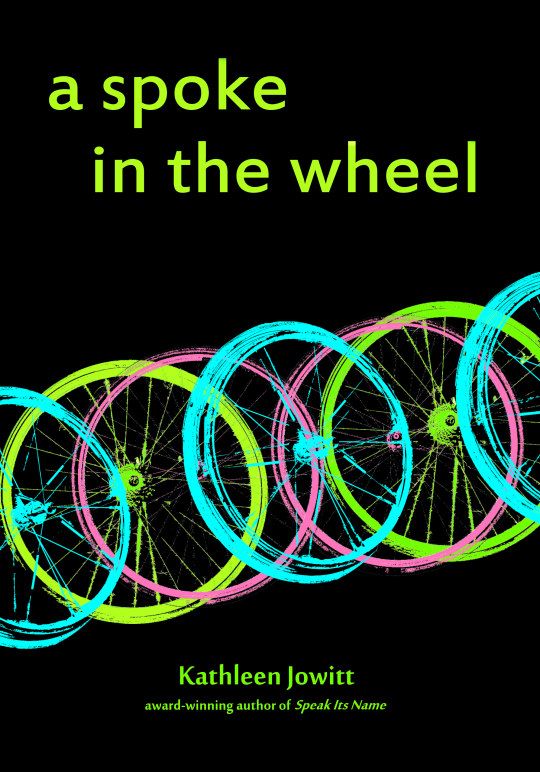 Three things make a post, or so they say. Well, I can manage two and a half.

Firstly, and most obviously, A Spoke in the Wheel now has a cover. My very grateful thanks go to those who took their personal conveyances to bits so that I could take photographs of the wheels.

The thing itself is on track (odd metaphor, for a bicycle/wheelchair book!) to be launched (even odder metaphor!) on Saturday 5th May. (That way there’ll be something to do if the Giro d’Italia is boring. Which it might be. There’s been so much controversy around where it’s starting and who’s starting it that the race itself could be a huge anti-climax.)

Secondly, I’ve been asked to judge a writing competition to celebrate the public service union UNISON’s 25th anniversary. I don’t talk much about the day job over here, but I’ve been working for UNISON for eight years now. Most recently I’ve been in Learning and Organising Services, which oversees training for reps and learning for all members – generally speaking, continuing professional development or building confidence.

One of the most wonderful things about what we do there is getting to meet people, who, having assumed or been told all their life that they can’t, suddenly discover that they can. That’s what learning is about, that’s what this competition is about, and I’m really looking forward to reading the entries.

And – here’s the half, because it’s very closely related to the above – I’ve written a blog for Unionlearn about finding the time and the confidence to write. It’s over here.