Camino Inglés 1: two ways to prepare for a pilgrimage

The first thing was to get around the ría de Ferrol; it took twenty-eight kilometres and all of the first day. We started at the naval museum – well, we started at the hotel, really; that was where we got our credenciales stamped – and then worked our way around three, or four, or perhaps five, sides of the bay. We were to see the big Navantia arch in the docks from several different angles over the course of the day.

The waymarks didn’t have QR codes the last time I walked a Camino (to be fair, we didn’t see many others like this)

Which was not to say that the scenery was uninteresting, simply that it didn’t seem as if we were getting very far. For the first hour or so we were very close to the water, and walking past cranes and ships – and a lonely little red-roofed chapel. Then we started gaining height and walking a little way inland. An avenue took us to a path alongside a major road, and then we crossed around the edge of a roundabout into a trading estate.

Snail tempted out by the weather

Eucalyptus in the rain

A series of short showers brought out lots of scents. Eucalyptus, fennel, seaweed. Some more evasive action around some more major roads, a faintly surreal stretch down an ordinary residential street, and a medieval monastery… Then we went further uphill, finding a path through a eucalyptus forest and under a motorway. The Camino was already demonstrating its variety.

The path went along the top of a grassy dam, part of a disused tidal mill, and then led us into the town of Narón. We decided that here was as good a place to stop for lunch as any, though it wasn’t quite twelve. This seemed to puzzle the proprietor of the bar we happened across, as did John’s vegetarianism, but neither problem was insurmountable. Not for the last time on this camino, we went for the items on the menu that looked to be the least heavy on the meat, and then I picked out the unmentioned sausage chunks.

Bridge across the Ría Xubia

The route crossed the Ría Xubia and almost felt as if it turned back on itself along a pleasant, riverbank path. But we were heading away from the water again, past a cemetery and then a church, and along what the guidebook calls ‘a street called Paraíso’ – which sounds as if it should be a film. Paraíso became the Rúa Real, and the whole thing was one of those streets that manages to be well-preserved yet still very much lived in.

Soon the buildings became less interesting and we crossed under another stretch of motorway. The route went steeply uphill; the sight of an emu in someone’s back garden went some way to compensate for the climb. We could have done without the sight of the Navantia arch. Nearly twenty kilometres and we could still see the wretched thing. We ambled on through this residential quarter.

Ría de Ferrol. I can’t see the Navantia arch in this; maybe I was so fed up with the thing by this point that I refused to take a photo of it.

The rain was sudden and intense. We had just enough warning to get our waterproofs on. We stopped in someone’s driveway to do it, much to the fury of their neighbour’s dogs. Within a few hundred metres it became clear that repeatedly putting the wet guidebook and taking it out again would reduce it to a pulp; so, too, would keeping it out. Fortunately John had brought a transparent plastic wallet to keep his credencial in: we put the credencial in with mine (in a waterproof bag deep in my rucksack) and repurposed the wallet for the guidebook.

We followed the path downhill and sorted ourselves out in a bar, spreading our waterproofs out over the backs of chairs, getting our credenciales stamped, ordering a coffee apiece, and waiting for the rain to stop. Waterproof jacket, waterproof trousers… It was already becoming apparent that my boots were no longer waterproof. It wasn’t entirely surprising, given their advanced age, but it was annoying.

A little way beyond the bar, the houses gave way to countryside again, and the path headed back uphill, straight up towards the motorway. Looking at the guidebook to refresh my memory, I find myself slightly surprised to discover that this all happened on one day. But then it was one long day. The route had been diverted around some roadworks, which meant that we bypassed the motorway service station that the guidebook had promised us. We ate some date bars instead, and grumbled about the habit of other pilgrims of cluttering up the waymarkings with ineffectual little cairns of stones. This was a particularly egregious example, with the stones in a plastic flowerpot.

That was probably the most trying point of the day. Once clear of the motorway gubbins we were onto a track through trees and then narrow country roads, empty of traffic, winding downhill, leading us to a pleasant green path and at last down to sea level again. Now we were walking along what I could only call a promenade, with wide pavements and beach cafés and all the rest of it, alongside a band of sandy soil with the water visible between the pine trees. And at last we’d lost sight of that arch.

The route took us over a long bridge that spanned the whole inlet, and into the town of Pontedeume.

The albergue was on the waterfront, a few yards off the route. It was closed when we arrived, and had a notice on the door with instructions of who to call to get it opened up. Feeling rather daunted, I did. ‘Somos dos peregrinos. Queremos rester aqui esta noche...’ It wasn’t brilliant Spanish, but it did the job; after about ten minutes the hospitalera showed up, unlocked the door, and issued us with disposable sheets and pillowcases. This was a new development since my last camino. I knew from Confraternity newsletters that bedbugs were an increasing problem along the route: this was an attempt to deal with it. There were plenty of bunks to choose from, even allowing for the fact that some had been reserved for what (judging by the notices on the beds, which I didn’t read all that closely) seemed to be an organised group on some kind of sporting excursion.

In the Pontedeume albergue.

Safely booked into the albergue, we went off the explore Pontedeume. We sat at a tall table outside a bar and drank beer while I tried to write my biography and John found his way onto the wi-fi. At the end of the beer we moved on, and, seeing a shoe shop, thought we might as well see if they could supply a new pair of insoles for John’s ailing boots. My Spanish was nowhere near good enough to cope with this task; we eventually got the message across by dint of John’s taking his boots off – and to pieces – to demonstrate. The shopkeeper was of the opinion that really new boots were indicated, and we tended to agree. I hadn’t realised how inadequate the old ones were. It would be expensive, but it would be worth it. 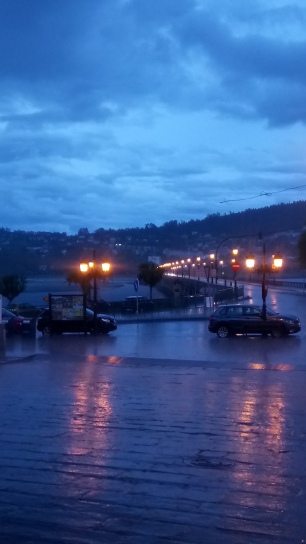 Pontedeume in the twilight

Boots purchased, we moved on in search of some food. We picked a bar based on the versatility of its menu, and dined entirely adequately on chips and padrón peppers – though we had some little difficulty persuading the woman who took our order that no, John didn’t want any ham. We were the only customers in the place, which had a slightly incoherent décor of bare stone walls combined with rock’n’roll heroes. Previous patrons had amused themselves by balancing coppers on the protruding edges of the stones; we added a few British pennies to the euro cents.

Returning to the albergue, we found that the Japanese pilgrims had propped the door open, and, having obviously found a supermarket somewhere, were enjoying a makeshift supper. There was no sign of the group with the reservations when we turned in. I couldn’t see how to turn the lights off; besides, the others were still up.

I woke some hours later to find that the lights were still on, but that the sporting group had arrived. I didn’t fancy getting down from my bunk to turn the lights off (and I still didn’t know how to) and I drifted off to sleep again.