In further evidence in support of the theory that Giorgia is actually an angel, she also washes horrible sweaty pilgrim clothes. She brought them back along with the breakfast. I took my time repacking and adjusting my rucksack, brushing away further flakes of the decaying lining, pulling almost everything almost as tight as it would go, and finally left at about a quarter to ten.

The first patch of nettles came about a quarter of a mile in. Had I but known it was the first patch, rather than the only patch. This was supposed to be the easy stage, the lazy six miles to let myself recover a bit. Well, the route itself was easy, but the paths in two places were so overgrown and scratchy that my legs became a criss-cross of scratches. 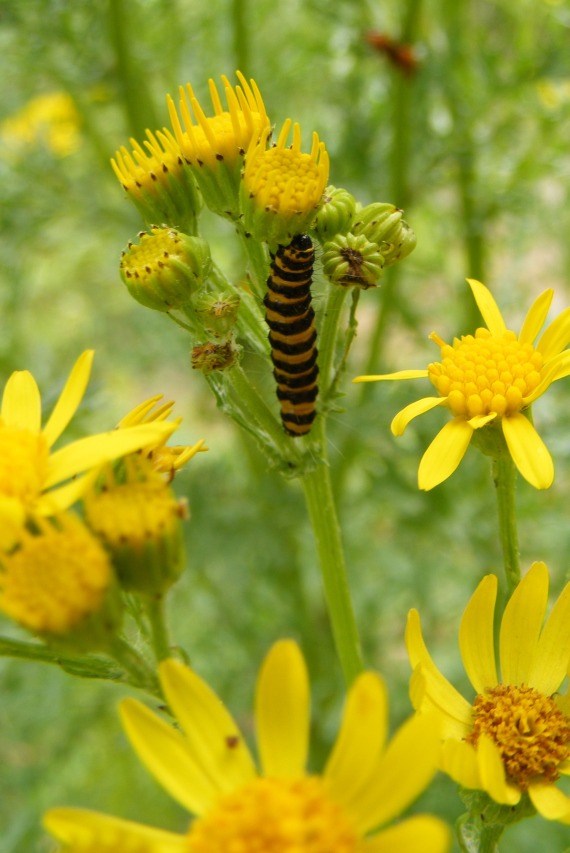 After the first patch of nettles I’d thought it wasn’t worth zipping the legs back onto my trousers, and yet I kept coming across more and more impassable paths through which I had to force my way, beating aside brambles and nettles and all sorts. Not to mention the plants that propagate their seed by means of adhesion. One of my socks ended up so thick with grass seeds that you could have toasted it, spread it with jam and eaten it for breakfast.

Along those six miles, I saw: yellow-and-black striped caterpillars; several ladybirds; the remains of a priory church, still a church through the sheer pig-headedness of the parishioners over several centuries. I saw a golf course. In fact, I saw far too much of the golf course and its hawthorny hedge, through which the footpath was supposed to run, and didn’t. I saw a field of poppies apparently grown as a crop – far too much of that field, too. The drying seed-heads of the poppies were viciously abrasive on my poor scratched legs. I ended up scrambling over a hedge (a very solid hedge, it was) to get out of that damn poppy field, and bought a very satisfying hot dog and coffee from convenient burger van in the layby on the other side. I crossed the road to proceed down a ridiculous nettly path alongside a potato field. At points I had to walk on the potatoes.

After that I had a respite from brambles and nettles, and walked down a pleasant, leafy path towards Worting. Reaching the village, I left the route and walked east into Basingstoke.

I ate at the drive-thru Costa at Basingstoke Leisure Park. I didn’t drive through it, or even walk through it; I sat down at a real live table. It made a change from my room in the Premier Inn. There is nothing like the actual hard reality of pilgrimage for dispelling any romantic notions one might have about pilgrimage. You live and walk in the real world, and the road shows you everything. Including Basingstoke Leisure Park.

But I had a bath. I washed my clothes and dried them on the heated towel rail. Spiritual enlightenment is one thing, but on the physical plane the one thing that you need to make a pilgrim really, really happy is a heated towel rail.

I’d meant to go straight to bed, but biology had other ideas (living and walking in the real world, remember?), and I had to cross the Leisure Park and a roundabout to a service station to buy tampons. I picked up a vastly reduced box of All Gold at the same time – by no means the most efficient way of carrying or consuming chocolate on the road, but I wasn’t going to argue with a quid. I had another bath and went to bed.

It took me ages to get to sleep. There was a noisy generator or something right outside my window, which I therefore couldn’t open, so was hot. So I watched a programme about Paula Radcliffe and dropped off eventually. It only occurred to me the next morning that I could have asked to change my room.

Next: the rain it raineth