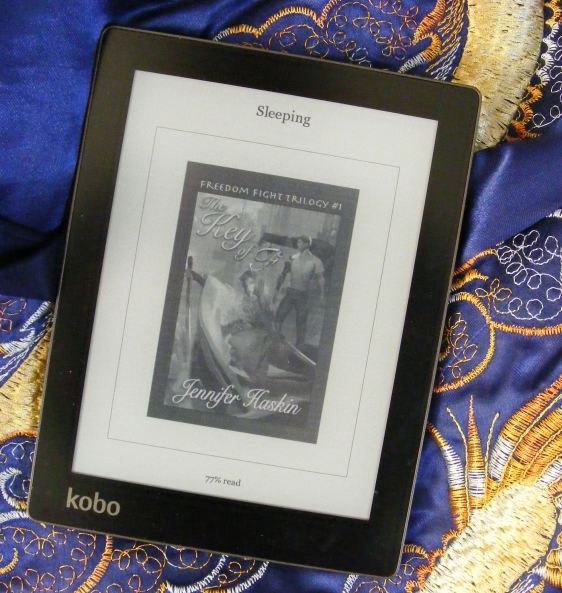 Though Fale has never discovered who murdered her parents and left her orphaned as a child, she attempts to lead a normal and peaceful life. After all, she is training to be a peacekeeping warrior under the direction of her adoptive father. But, when she starts having strange visions that predict the future on her 18th birthday, it turns her life into anything but ordinary. Alongside her best friends and the man who rejected her three years ago, Fale must discover the truths of her past to achieve her true destiny.

Can she harness her inner warrior to save her people? And can she prove that she is no longer an innocent child to the man she loves along the way?

Jennifer Haskin is an ex-literary agent, author, and portrait artist who lives in Olathe, Kansas with her husband and five children.

Rogue Phoenix Press is an ebook publisher representing a wide range of genres. It was established in 2008, though I don’t think I’d heard of it before I read this book.

How I got this book

I took part in the author’s 2 Writer Switch programme. (You can see what she thought about my book on Goodreads!)

Again, I have a lot of options here! This could count towards ‘Genre fiction’ (see ‘My thoughts’ for more on that!), ‘Book from a series’, ‘An author from another country’, ‘A new to you press’, ‘A debut’, or ‘Kids or YA’. I think I’m going to read a few more of the books I’ve got earmarked for the challenge and see where the gaps are on my card; at the moment it feels a bit like the connecting wall on Only Connect.

The Key of F is an ambitious young adult novel that straddles a number of genres. It has the intensive surveillance and the high-tech body modification of science fiction. It has the wizards and mages and the Chosen One narrative of fantasy. And it has the makeovers and petty jealousies of high school and college books. It’s not until about half-way through the book that those three strands come together and we see where it’s all been leading.

The main thrust of the novel follows Fale, an orphan who has been entrusted with a mysterious key and who is on a quest to find her guardian and mentor, Nelson. But of course it’s not as simple as that, and her investigations only present further missions. I did wonder whether her name, and ‘Effailya’, from which it’s derived, could be a punning clue to where this series is eventually going to end up… We’ll see about that one. She’s variously helped and hindered by friends Keron, Izzy and Lisle, who represent other groups within the social makeup of Algea, and the differences between classes and occupations lead to some conflict between the four – something that will no doubt be explored further in later instalments.

I was fascinated by the brief glimpses we got of the system that underpins this world: where people are forced to work in an environment that seems set up to seriously injure them, at which point their only option is expensive prostheses, which they then spend the rest of their lives paying off. It was a neat satire on certain real-life systems, and I’d have liked to have seen more exploration of it. But I was puzzled, too: daiquiris, lasagna, katanas and rock bands suggested the influence of an Earth culture that appeared never to have existed in this world.

This is only the first of the series, so no doubt some of my questions will be answered in the next book!

2 thoughts on “#indiechallenge – The Key of F (Jennifer Haskin)”