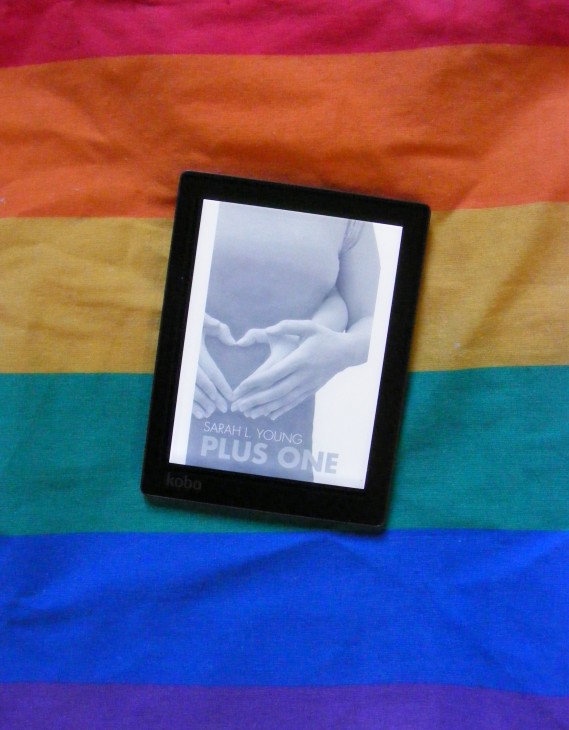 Junior year is hard for everyone, but especially for Lexi—and in about nine months, it’s going to get a lot harder. She doesn’t know what to do, how to do it, or who the father is.

Lost and afraid, she calls the only person she can think of for support: her ex-girlfriend Emily, who recently dumped her. But if Emily isn’t willing to help, then Lexi is afraid she’ll be facing this all alone…

Sarah L. Young is studying at Wellesley College and is originally from Syracuse, New York.

Less Than Three Press specialises in LGBTQ romance, and produces both print and e-book editions.

I downloaded this from Kobo.

Plus One could count towards: ‘Genre fiction’; ‘an author from another country’; ‘a new to you press’ (I’d heard of Less Than Three, but never read anything published by them, to my knowledge); ‘a debut’; ‘kids or YA’; ‘marginalised people’; or ‘LGBTQIA’.

This one was sold to me as ‘bi teen girl gets pregnant when she and her girlfriend split up, but only has her ex-girlfriend to turn to when she gets thrown out of her home’. Which immediately appealed to me in a nostalgic, school library, kind of a way. (If only Section 28 hadn’t been in force at the time. There were plenty of books about teen pregnancy in the school library, but none of them involved anybody being anything other than straight.)

And that was a pretty good summary. The problem was, there wasn’t much more to the book than that. Lexi is pregnant. Emily tells her that it’s going to ruin her life. Lexi’s mother throws her out. Emily takes her in. A deus ex machina in the form of the principled Christian father of a friend solves the money problem. There was very little in terms of character development, and such as there was felt forced. (For example, I really wasn’t convinced by the eventual resolution of the relationship storyline, and wasn’t reassured that any of the problems that had led to the initial break-up had been solved.) When I reached the end of the e-book and discovered that this had been written as a NaNoWriMo effort when the author was fifteen, my rather uncharitable thought was that this explained a lot.

There was a lot of infodumping about abortion options, and, later, what Lexi could expect in terms of physical symptoms of pregnancy. This was all very laudable, particularly given the patchy provision of sex education in the USA, but rather reminded me of the way that The Archers began as a way to distribute news of agricultural developments to farmers. And the prose was very clumsy. Too much showing, not telling, action, and too much telling, not showing, about emotions and relationships. Although this may just be a YA thing: this is the second one in a row where I’ve really not been convinced by any of the characters and have found the prose dull. I can’t help feeling that our young adults deserve better…