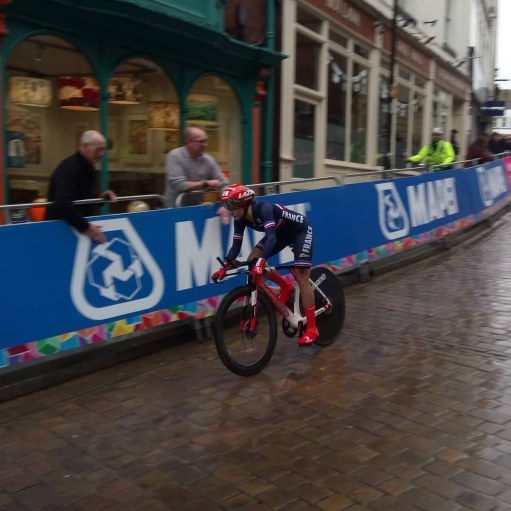 September 2019. A trip we’d been planning ever since we heard the world road cycling championships were going to be in Yorkshire this year.

On most days we went to the finish line in Harrogate.  For the women’s time trial, we went to the start of the route, in Ripon. It was a funny old week, weather-wise. There was one day of blazing sunshine, and then several of rain. This was one of those rainy days.

One of the things that I particularly love about cycling – as a spectator, rather than a participant, I mean – is the way that you can, without paying a penny, turn up at the side of an ordinary road and watch some of the best sportspeople in the world pass by within a few feet of you. The World Championships joins a list including the Olympics, the Tour of Britain, the Women’s Tour, and the Tour de France that I’ve managed to see without even having to leave the country. Not to mention the Tour Series, which was so very much right there that I turned up to it by accident, and that’s how I got into cycling in the first place.

Anyway, it’s worth getting a bit chilly for.