I mentioned yesterday that earlier this year I attended an event called Thoughtful Eating. Much of what was said there wasn’t new to me. But the conclusion – an attempt at a Biblical approach to food – sparked something in me. In particular, two words: delight and sharing. They’ve stuck with me through this year.

So I put delight and sharing at north and south for my 2020 compass. The rest of the qualities fitted in around them.

Delight, at north, is really another form of sharing: it’s noticing the good things that have been shared with me, seeing the holiness of them, and, if I can, sharing those things and that delight with others.

As, for example, the moment, looking back at almost the last daylight of 2019, when a swan swooped overhead just as I had my phone out to take a picture of bare trees against a clear, clear sky, wheeled around with a keen whirr of wings.

Perhaps they shouldn’t be surprising. When in the autumn we added up the balances of our various savings accounts and found that they made a mortgage deposit, that was after many years of channelling a direct debit in that direction.

The opportunity to serve on a Cursillo weekend. I wrote a couple of days ago about ‘the privilege of loving people’, and this was largely what I had in mind. Making tea for people, putting chairs out for them, washing their hands… it was wonderful.

Good progress on two books. The Real World is more or less there in terms of word count, and I’m looking forward to diving back in with a red pen in a couple of weeks’ time. The Rassendyll Kidnapping is a lot more nebulous, but a whole load of plot came together in my head at the beginning of December, and I got most of it down before I forgot it again.

Time with family and friends – particularly a week with my family at and around Ventnor Fringe, and a week with the in-laws on a narrowboat on the river Avon, and another week with my friend Anne in York. I’d like to see more of more people next year, though.

The chance to see the best cyclists in the world ride past me.

I’m still learning how to feel at home under this vast pearly, milky, sky; to orientate myself against a horizon that’s low and flat and at once remote and close; to measure myself in a landscape where the tallest thing is a tree, or was built by human hands.

But it’s the same sky: this wide blue-and-white sky; this low, sulky, grey sky; this deep blue, starred sky. It stretches over everywhere I’ve called home, and the places I have yet to call home. 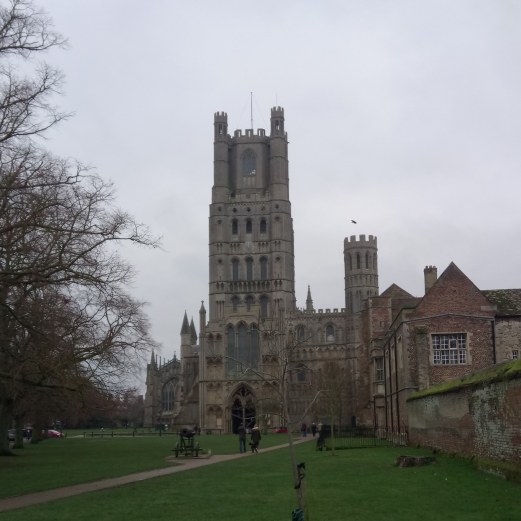 It seems to be where we’re going next. We’ve had an offer accepted on a house out on the north-west edge. It has pear trees in the garden.

I should have taken a photo of the first sight from the south, the cathedral side on, rising up from the flat land around it. The Ship of the Fens, they call it. It doesn’t look very ship-like from here, the middle of town.

Even this year I’ve spent a lot of time in Ely, mostly doing Cursillo-related things. It’s been drawing me towards it. City on a hill, fen-bounded island, eely Ely.

One of my internet friends wrote:

and when I read it something resonated inside me: Yes. This. This is what I want.

I felt something similar at the end of the Midnight Eucharist, very early on Christmas morning:

Go in peace. Proclaim the Word made flesh.

Yes, this. And how that works, how far I stay involved with my current church, what else I do, what lies beyond that, I don’t know. I can only trust that two apparently contradictory wishes are in fact taking me towards the same figurative destination. Anyway, this physical location seems to be the place to investigate things further. 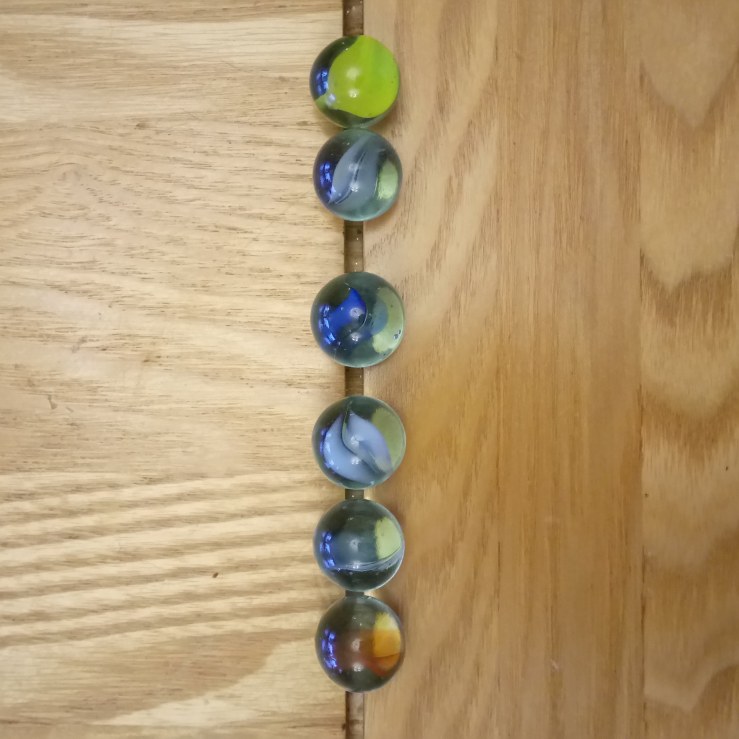 … how to move past despair;

… that my understanding of myself and of the world can change quickly and then feel as if it’s always been that way;

… that riding a road bike is similar to, if not just like, riding a bike;

… that the closer I stick to a template for a talk, the more artificial it sounds;

… about the sheer privilege of loving people;

… about who I’m becoming.

Boxing Day tends to involve a lot of food: either leftovers, or food that is not technically leftovers, but only because nobody got around to cooking it. And when you’re combining British and Polish traditions, you end up with two huge meals, and even more food that needs eating afterwards.

This morning I cooked omelettes topped with smoked salmon, which would have been the fifth or sixth course of Tuesday’s Wigilia (Christmas Eve vigil) meal, if we hadn’t been full after several other dishes of fish/soup/pierogi/carrots/more fish. And I meant to take a photo of them for this prompt, but between cooking them and then eating them I completely forgot about it. So here’s a slice of Christmas Eve bread instead.

It really doesn’t matter. Everything I’ve eaten over the last couple of days has been delicious. 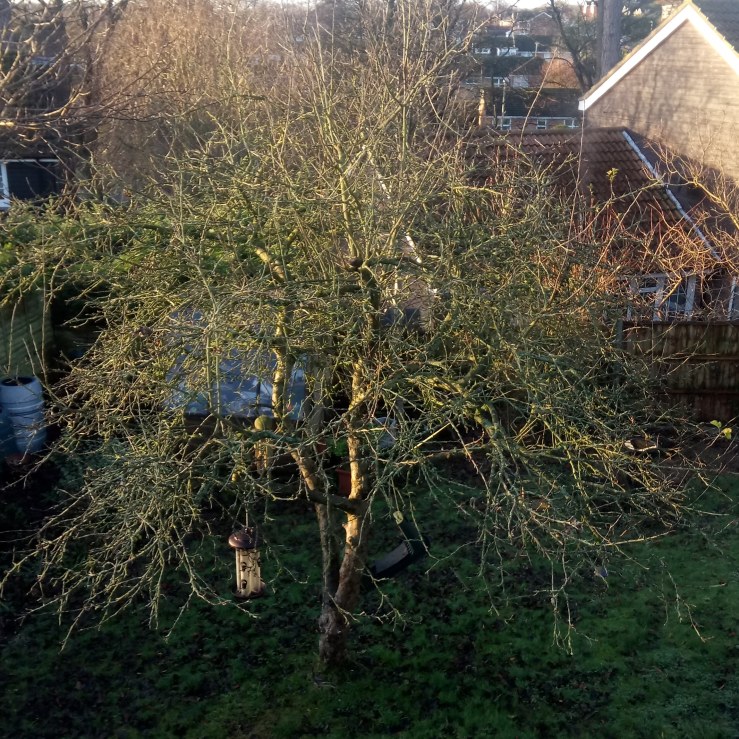 I slept last night in a house that’sbbuilt into the side of a hill, so the bedrooms are downstairs, and when you get up, you literally get up. And coming upstairs to see all the trees lit up in this glorious golden morning sunlight lifted my heart into joy.

We were talking last night about the the tendency of people (all over the place, not just here) to think of a bygone golden age, probably coinciding with the year they were about ten, which of course was never really like that. And somebody said, ‘But the golden age is now’.

Today is golden. Today is illuminated with visible light and a deeper light.

Look at that apple tree.

Secrets: hidden in the darkness, quietly doing their own thing.

This is the thing about secrets: you never know quite what they’re going to look like until they come out into the light.

I love what the light does in this church. Often – and I can be anywhere in the church, and it can be any time of the day – I am surprised by some new lovely way that it falls. At Evensong on Easter day I am up in the stalls, and the evening light streams richly through the rich colours of the windows at the west end. On a Sunday morning I am usually in the south aisle, and and the light is clear and bright and it makes the pillars look like a watercolour painting. Sometimes a butterfly wakes and flutters around. There’s the warm orange through the chancel windows, and the high summer light filtered through pale green and pink glass in the clerestory. There’s the darkness, too: a stormy Ash Wednesday evening with the windows dark and opaque.

This morning was grey, and I left the house just after the end of the rain. The first part of the church service was the organised chaos of the nativity tableau, and I sat in my usual spot in the south aisle, just behind this window (but it didn’t look like this, then). The second part was the short communion service. I moved into the middle of the church. I didn’t immediately notice that the light was growing brighter and brighter and brighter. Afterwards, I looked up, and the sun was out and shining straight in.

The longest night is over. Here’s the light.

I applied for a new job this year. I didn’t get shortlisted, though I did get some encouraging (and also useful) comments on my application. Considering I only decided to apply about thirty-six hours before the deadline, that isn’t bad going.

This happened during a very weird couple of weeks in which a whole load of things shifted in my mind. There had previously been a couple of assumptions in my head which had been stopping me applying for that post: firstly, that I didn’t have enough relevant experience; and secondly, that the grade it was at would be my ceiling, so it would be a pity to get to it too soon. Those assumptions dissolved with a day and a half to spare, and so I wrote an application and submitted it.

And that was just the beginning of a fortnight of unpicking all my perceptions of my abilities and assumptions about my future. Except when I went back and looked at everything I’d written over the past year, it turned out that I’d been tiptoeing around the subject for a very long time. My head had been there for a while. It was just that my heart had caught up. More on that next year, maybe.

Things I did get shortlisted for: two literary awards. The Selfies, and the Exeter Novel Prize. I went to both awards ceremonies, and was struck by how friendly and supportive all the shortlistees were, and by how different the two groups were.

The Exeter Novel Prize group were excited, enthusiastic, mostly first-time novelists with dreams of publishing deals. The Selfies crowd were also excited, pleased to have been shortlisted, but they’d seen it all before and tended not to be impressed by the publishing industry (which was all around, since the awards ceremony took place at the London Book Fair). Self-published authors tend not to give a damn about what anybody else thinks – you might say that it’s a prerequisite for self-publishing in the first place. We ignore the gatekeepers; we climb over the walls, instead.

And so I’m a little bit surprised to find myself open to the idea of walking up to the gatekeepers – a different wall, and a different gate, but it has its gatekeepers nonetheless, and saying, ‘Do you fancy letting me in?’ I’m not there quite yet; I’m still loitering in the road outside. But I’m thinking about it.