I applied for a new job this year. I didn’t get shortlisted, though I did get some encouraging (and also useful) comments on my application. Considering I only decided to apply about thirty-six hours before the deadline, that isn’t bad going.

This happened during a very weird couple of weeks in which a whole load of things shifted in my mind. There had previously been a couple of assumptions in my head which had been stopping me applying for that post: firstly, that I didn’t have enough relevant experience; and secondly, that the grade it was at would be my ceiling, so it would be a pity to get to it too soon. Those assumptions dissolved with a day and a half to spare, and so I wrote an application and submitted it.

And that was just the beginning of a fortnight of unpicking all my perceptions of my abilities and assumptions about my future. Except when I went back and looked at everything I’d written over the past year, it turned out that I’d been tiptoeing around the subject for a very long time. My head had been there for a while. It was just that my heart had caught up. More on that next year, maybe.

Things I did get shortlisted for: two literary awards. The Selfies, and the Exeter Novel Prize. I went to both awards ceremonies, and was struck by how friendly and supportive all the shortlistees were, and by how different the two groups were.

The Exeter Novel Prize group were excited, enthusiastic, mostly first-time novelists with dreams of publishing deals. The Selfies crowd were also excited, pleased to have been shortlisted, but they’d seen it all before and tended not to be impressed by the publishing industry (which was all around, since the awards ceremony took place at the London Book Fair). Self-published authors tend not to give a damn about what anybody else thinks – you might say that it’s a prerequisite for self-publishing in the first place. We ignore the gatekeepers; we climb over the walls, instead.

And so I’m a little bit surprised to find myself open to the idea of walking up to the gatekeepers – a different wall, and a different gate, but it has its gatekeepers nonetheless, and saying, ‘Do you fancy letting me in?’ I’m not there quite yet; I’m still loitering in the road outside. But I’m thinking about it. 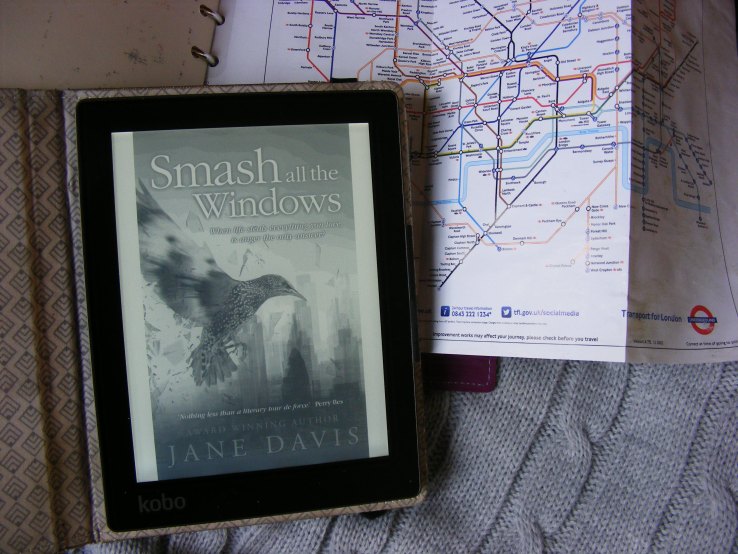 For the families of the victims of the St Botolph and Old Billingsgate disaster, the undoing of a miscarriage of justice should be a cause for rejoicing. For more than thirteen years, the search for truth has eaten up everything. Marriages, families, health, careers and finances.

Finally, the coroner has ruled that the crowd did not contribute to their own deaths. Finally, now that lies have been unravelled and hypocrisies exposed, they can all get back to their lives.

If only it were that simple.

The author and publisher

Jane Davis is the author of eight novels; her first novel won the Daily Mail First Novel Award; her seventh was Writing Magazine’s Self-Published Book of the Year 2016; and Smash All The Windows won the first ever Selfies Award.

She’s someone who takes writing and self-publishing very seriously, and it was an absolute pleasure to meet her at the London Book Fair earlier this year.

I bought the ebook version from the Kobo store.

This could count towards: ‘A Women’s Press’; ‘A New To You Press’; ‘An Award-Winner’, or ‘Book from a micro press’.

This is a really good book. It takes as its starting point an imagined crush disaster in a London tube station, and follows the families of the victims as they variously seek the facts, campaign for justice, and come to terms with their loss. Sometimes diving deep into the day of the disaster, sometimes looking several years beyond it, the interweaving strands are easy to follow, and the characters are well delineated and all very human.

There were times when I forgot that I was reading fiction, and found myself wanting to go to Wikipedia to find out more about the disaster. Jane Davis says that she thinks of fiction as ‘made-up truth’. She’s certainly achieved that here.

Yesterday I attended the London Book Fair for the first time ever, thanks to BookBrunch, who provided free tickets to everyone on the Selfies Award shortlist. In the morning I spoke as part of a panel of four on the experience of self-publishing; then I met up with a friend and we went out along a very wet Kensington High Street to get some lunch and agree that the whole thing was very impressive but a bit overwhelming, and then I was back in time to wander around the fair a bit more before the awards ceremony.

The Selfies Award went to Jane Davis for Smash All The Windows (just under my arm in the picture), and it’s very well deserved. I can’t think of anyone who puts more work into making self-published books into a really high quality product, or, for that matter, anyone who does so much to support and encourage other authors in the field. Congratulations, Jane!

I’m very excited (and a little bit apprehensive) to be attending the London Book Fair today. If you’re going, you can see me…

… talking about The Self-Publishing Experience, where I’ll be on a panel with some of the other authors on The Selfies shortlist, at 9.45am.

… discovering who’s won the first ever Selfies Award, at 4.30pm.

Both those events are in the Author HQ.

Outside those times, I’ll probably be wandering around bemusedly or looking for a cup of coffee.

Indieathon is back! This time it’s being organised by Ninja Book Box, who have a Youtube video about it here, and takes place over a week (8th-15th March) rather than a month. (Last time round I only found out about it halfway through March, so this is less of an adjustment than one might think.)

Anyway, I’m planning to join in, in a somewhat desultory way – by which I mean that I’ll be reading a little bit more than usual for a not-writing fortnight, and what I read will come from independent publishers and self-publishers, and will appear in due course as an #indiechallenge review.

The picture might look like one of those carefully curated TBR piles, but it’s really just a collection of books that I’ve been meaning to get around to reading that happened to be in an accessible place on the bookshelves. I need to check some of them to make sure that they really are independent publishers, and not just some imprint of one of the Big Five. And of course The Art of Lent is going to take me rather more than a week, otherwise there isn’t really much point to it.

Also in the middle of that week is the London Book Fair, which I will be attending courtesy of my Selfies Award shortlisting. The awards ceremony is in the afternoon of Tuesday 12th March, and I may also be appearing on a panel in the morning, talking about ‘the joys and perils of self-publishing’, in the morning. Both events are in the Author HQ.

*Now is probably not the moment to confess that I’ve always found the term ‘indie’ insufferably twee, is it? Oh well. There isn’t really anything else that covers ‘self-publishers, plus independent-but-not-necessarily-small-presses’, and ‘independent’ would sound insufferably pompous.

Well, after a winter that I’ll freely admit has been a bit of a slog in terms of writing, I’ve got three pieces of good news to share this week.

I’m very pleased to announce that A Spoke In The Wheel appears on the first ever shortlist for The Selfies Award. Self-publishing can get you second-guessing yourself and your work, and it’s such a delight to have the quality of your work recognised. Kudos to BookBrunch for establishing this award.

I’d also like to say how good it is to be part of the self-publishing community. All eight women on the shortlist seem to be as pleased for each other as they are for themselves! I’m really looking forward to meeting them at the awards ceremony.

My short story Stronger Than Death appears in Rainbow Bouquet, a Valentine’s anthology from Manifold Press.

Cecily Strangways could never see ghosts – until she became one herself. Now, three hundred and fifty years later, she’s got to find some way of saving the family home from being turned into offices – and persuade the Grey Lady to help her.

The other stories in the anthology also look like a lot of fun! You can pre-order it at Amazon.co.uk, Amazon.com, and Smashwords.

You’ll have to wait a bit longer for this one, but I’ve also got a short story lined up for the Lesbian History Motif Podcast’s fiction series. Again, the rest of the table of contents looks very intriguing as well.

In The Mermaid, a farmer’s daughter on the treacherous south-west coast of the Isle of Wight finds unexpected treasure in a shipwreck. But someone else thinks it belongs to him…