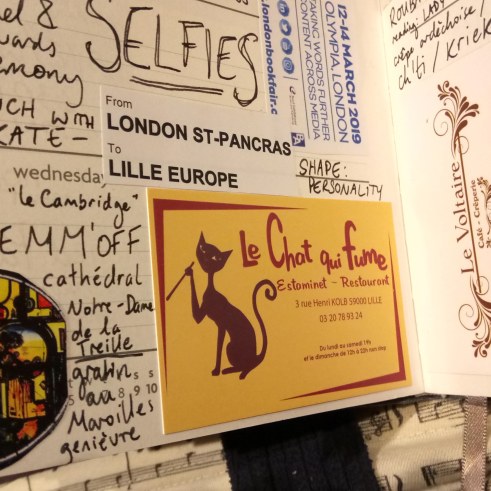 We went to Lille in March: one last (as we thought) chance to go to mainland Europe before it became a whole lot more hassle. As things worked out, that was the last time, and I doubt we’ll manage to get our act together in January, so…

Anyway. We stayed in an apartment in the Wazemmes district of Lille, which felt more like a place where people actually live and work than many other places I’ve been to. Which was great: there was a covered market, and in the mornings our hosts brought us fresh croissants in a paper bag. What it didn’t have so much of – at least on a Wednesday night – was places to eat, as we discovered when we headed down the rue Léon Gambetta (pretty much every settlement in France has a rue Léon Gambetta somewhere or other) in search of food. We walked for quite a while without finding anywhere that took our fancy, and eventually resolved to go a little bit further and then turn back.

That’s an approach that either works for me, or else fails horribly. In this case it worked beautifully. Le Chat Qui Fume was just off rue Léon Gambetta, at the intersection where we’d resolved on turning back. It was a pleasant place, quiet, dimly lit. We had it to ourselves for the first quarter of an hour or so. Maroilles is a very pungent cheese, and a local speciality. It was fantastically good in a gratin with potatoes and bacon. Afterwards, I tried genièvre, and liked it. As the name suggests, it’s related to gin, but it’s harsher and smokier, more like whisky.