Joanna Victoria tagged me for this meme (yes, in internet years I’m ancient, I cut my HTML teeth on LiveJournal, I call it a meme), which began with Princess of Paperback on Youtube, a couple of days ago.

Lying in bed – a book you read in one day

I only picked this up to check something for my next Reader’s Gazetteer post (it’ll be coming up under P for Paggleham) and then bang! that was the rest of Sunday afternoon gone. Nobody would tell someone to begin the Lord Peter Wimsey series with Busman’s Honeymoon, but it was the first one that I picked up, having run out of Agatha Christie, in my mid teens. Hadn’t a clue what was going on for most of it, but I loved it.

Snacking – a book that is a ‘guilty pleasure’ read

I’m with Joanne Harris here – there’s no such thing as a guilty pleasure read.

(I’m always tempted to name a book by one of those dreary Great White Middle-Aged Men novelists in this category, but nobody would believe me.)

I don’t think that snacking is a guilty pleasure, either.

Netflix – a series that you want to start

(Apologies, by the way, for the way that my ebook reader makes book covers look so dull. I’ve done my best with a German tablecloth here.)

Working my way through fictional lands for the Reader’s Gazetteer, I’ve noticed that my focus has been very Eurocentric. I was intrigued, therefore, to come across a series set in, or featuring characters from, a fictional African country named Thesolo. I’m not a great reader of romances, but the Reluctant Royals series by Alyssa Cole does look intriguing.

And, while I’ve read a lot by L. M. Montgomery, I haven’t read her ‘Pat’ series, despite having had a copy from someone on BookCrossing years ago.

This one would also work for the next prompt: 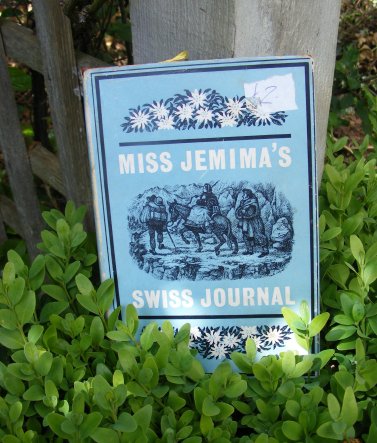 I thought that this looked absolutely delightful, and bought it, and have never got round to reading it. As the name suggests, Miss Jemima’s Swiss Journal is a diary by a young girl from the period in the nineteenth century when the Alps were just becoming a desirable holiday destination.

Animal Crossing – a book you bought recently because of the hype

Well, there’s certainly been a lot of hype around The Flat Share – which is a fun take on the old Cox and Box ‘two people share a living space but never meet’ story – though I probably wouldn’t have bought it as soon as I did had it not been a pick for one of my book clubs.

But I’ve been playing Animal Crossing on and off since university – more or less as long as I’ve been on the internet, in fact – we played it in the same way some other student households watched Teletubbies.

So instead I’m going for a ‘childhood classic I only got round to in adulthood’: 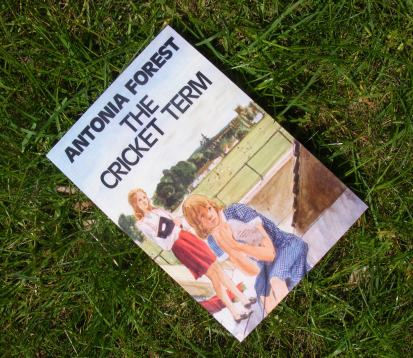 There were plenty of school stories in the house when we were growing up, but we missed Antonia Forest’s Marlows series. I think I probably appreciate them more now than I would have then: ‘school story’ is only half the story, and the eclectic, often experimental, mix of genres, and the bleak verging on cynical worldview, would probably have put me off when I was younger.

I’d heard of Bird by Bird a while ago, but had been putting off reading it as I feared it was going to be twee and wholesome, and I have to be in a very specific mood to put up with being exhorted to let me creativity flower or whatever.

Now I’m actually reading it I find it’s not like that at all: it’s deliciously bracing and down to earth. Some of the lessons in there I’ve already worked out by trial and error. Some of them I hadn’t got round to putting into words. Either way, though, I’m enjoying Anne Lamott’s company, and will be looking out for her books that aren’t about writing, too.

Facetime – a book you were given

I cannot bring myself to write ‘gifted’ as a verb. Sorry.

Anyway, nobody’s tried to give us any books since we moved, which is probably a good thing, but I did win a BookCrossing sweepstake:

Self-care – what is one thing you have done recently to look after yourself?

I’ve been setting my alarm for 7.15am (when I go back to commuting to London it’ll be over an hour earlier than that, but let’s not think about that) so that I can get in a walk before breakfast and morning prayer. And I’ve been trying to spend as much time as possible in the garden, slowing down, paying attention, doing very little.

Bonus – an upcoming release you are looking forward to

I am, as always, out of the loop on what’s new, and massively behind on reading what’s recent. But I do have my eye on Joanne Harris’ Ten Things About Writing.

My new ‘self-isolation reading club’ badge is from _erisapple_. I never tag other people, but if you like the look of this then consider yourself tagged.