Camino Inglés 1: two ways to prepare for a pilgrimage

The last day of the Camino Inglés: Sigüeiro to Santiago. It was a pleasant enough day’s walk, especially in the early stages: a cuckoo in the woods above Sigüeiro; gentle slopes; gentle sunshine.

Sixteen kilometres according to the book, but the yellow arrows departed from the book at a left turn (book)/right turn (arrows).

We followed the arrows.

The diversion (if such it was) was tedious: it took us through a bus stop and along a very wet and muddy path, though fortunately not so wet that it got through my boots. The worst thing about it was the fact that there were no waymarkings, so I was constantly worrying that we’d got ourselves lost. The sign for Hotel Castro was a real relief, and the coffee was as welcome as the assurance that yes, we were indeed still on the Camino Inglés, but we then spent much time discussing whether it was a change to the route, a reversion to a previous route, or a scam by the Hotel Castro to drum up more trade. (They got €2 out of us for coffee. I suppose it adds up.) Hotel Castro had set up an ‘enchanted forest’: it was a silhouette of a witch on a white umbrella. It was a little bit underwhelming.

We worked our way gradually downhill into the suburbs of Santiago, getting hotter all the while. Actually it wasn’t so bad as it could have been: the arrows had rejoined the guidebook, so at least we were no longer worrying about being led astray.

On the Camino Inglés the cathedral creeps into view gradually: you see the tops of the spires peeping out above the rooftops, and only if you know what to look for. We knew.

And we found the way there with no trouble at all, but there was no obvious way in: the front was covered in scaffolding.

We went to the pilgrim office instead, and found a massive queue. John recommends going in November. I recommend going ten years ago. Still, we got our compostelas and went to find lunch – after which I felt much happier.

John booked a hotel via Booking.com, and I felt happier still. We then wandered around most of the old town trying to find it, and eventually had to ask in a tat shop, by which time I was feeling thoroughly sick of Santiago and all the people in it.

A feeling which, I regret to say, persisted on and off all through that Sunday and Monday. There were moments, but really it was such a shock after the quiet of the Camino Inglés, and it has become such a tourist/pilgrim trap even compared to the last time I did it…

Which I knew. This is why we chose the Camino Inglés. It just hadn’t occurred to me that Santiago was bound to be packed, regardless of where we started.

Getting away from the old town helped quite a lot. We found another fairground, and ate chips from a booth and looked at second hand bookstalls.

I dragged John to the pilgrim mass on Sunday evening – in Spanish; if one has to feel that one’s a heretic, it’s less galling in a foreign language – though we had to stand through an interminable sermon (and they take the trouble to remind you in English that heretics can’t receive communion). After that we picked a pleasant bar and had a drink. Tapas appeared, in the form of an empanada. We shared it: I had the tuna, and John the bread.

We went back to the cathedral early on Monday morning and it was quite a lot better. I was brave enough to give Saint James a proper hug this time, as opposed to the gingerly pat on the shoulder I managed in 2007, and I found that there was a sense of holiness around the crypt, never mind the fact that I don’t believe that his earthly remains are there, no matter that I don’t believe his matter matters any more.

On Monday we went around the cathedral museum, and sprung for the tour of the roof as well. And this was worth doing, for the views over the city rooftops and for the nooks and crannies that one never normally sees. We were also charmed to find in the museum an altarpiece given to Santiago in the late fifteenth century by a man named John Goodyear from ‘Chal, Isla de Wight’ – or, as we know it, Chale, a couple of miles down the road from where our parents live. 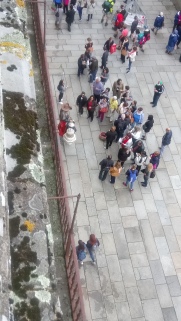 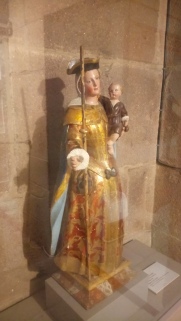 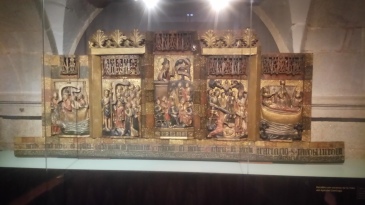 We also returned to the café next to our hotel several times during the course of the day, so that I could get into wi-fi range and see whether I was famous yet. Because this was the day that the Society of Authors was meant to be announcing the Betty Trask shortlist, and this would mean that I was finally able to tell somebody other than John.

I was not famous yet. We walked down to the station to buy tickets to Palencia (€26 apiece, which wasn’t bad at all), and spent the rest of the day writing postcards, drinking coffee, returning to wi-fi range to check Twitter again, and going rather overboard in the souvenir shops. (A cycle jersey for John, an extravagant selection of sew-on patches for my camp blanket, and a model horreo for our father to put next his model railway. And more postcards.)

Then, on John’s suggestion, we went to a bar that the internet said would have live music, except instead it had stand-up comedy in Galician, possibly being rude about pilgrims. It was difficult to tell, for obvious reasons. Though stand-up comedy in Castilian would have been just as unintelligible to us. There was live music, in the form of a couple of cor anglais solos. Also a musical box, though that was part of a card trick.

When I went to bed I was still not famous.

Next time: we like Palencia a lot, and then go home. And I get my fifteen minutes of fame.