I finished reading my twentieth book of the year yesterday morning: The Invisible Woman, by Claire Tomalin. Here’s the full list:

It’s now April, so I’m almost exactly on time for the #TBR20 challenge. I committed to reading only books I already owned for the first three months of the year, and also for the first twenty books I read.

And I’ve just discovered, going back through Goodreads to put the links in, that I’d forgotten The Ghostly Lover, which should have gone in between Station Eleven and A Poet’s Bazaar. So I could have written this post on Friday instead. Never mind.

It’s an interesting picture, and I’m amused by the distinctly Mittel to Eastern European flavour that’s emerging. The Eva Ibbotson and the Patrick Leigh Fermor were deliberate choices – I was looking for nostalgia for a Europe that no longer exists to be visited even if I had been able to get to it. So were Andersen’s journey and Christa Wolf’s Berlin: they count towards the #EU27 project too. But they echo Le Guin’s Orsinia (which will get its own post, soon), and some of the lesbian vampires too.

Some of those are books I wanted to get read so that I could get them out of the house: six of them have now moved on via BookCrossing. Two were books that I’d started reading in 2019 (Provenance was my bedtime book, so I was only reading a few pages at a time; Malafrena my lunchtime one.) There are a couple of shorter books for school aged children which I read to hurry things along: Reaching Out was fairly dull, but The Silent Boy did some clever things with the form.

I’d been putting off The Two Pound Tram in case something awful happened to the tram (it did, but it wasn’t Death by Newbery Medal territory). Giovanni’s Room was something I’d been meaning to read for ages. I picked up The Years when I was packing to move and didn’t seal that box until I’d finished it. Inevitably, I suppose, some of these were things I might have read sooner if I’d known how much I’d like them, and some of them were things that I could just as well have done without.

And now I’m off to buy three books for three different book clubs or readalongs. (Madam, Will You Talk, The Flat Share, and An Experiment in Love.) I’m behind the curve on all of them, but I’m sure I’ll be able to catch up. Actually, I think I might have read the Hilary Mantel before. I certainly don’t own a copy, though…

On Friday I thought that I really ought to get going on the EU27 project before Article 50 became irrevocable and the wheels were set in motion for leaving the EU. This was one of (I think) two options that I had readily available, and as a narrative of a European travelling in Europe it seemed particularly appropriate in itself.

This book covers Andersen’s journey south from Copenhagen, via Germany, Italy, Malta and Greece, to Turkey, and back again up the Danube, in the early 1840s. It’s very much a travel narrative, but we don’t forget about Andersen the teller of fairy tales. Occasionally a particular landmark results in a self-contained story embedded within the text; sometimes Andersen remarks that some experience might prompt a story; most often it’s his lovely lucid style that reminds us that this man knew how to tell a story.

Sometimes his experiences felt very familiar to me, and I was pleased when he reached Pressburg (Bratislava in my time) and his boat moored in a stretch of the Danube that I’ve looked out over. And this, though it’s from the very earliest days of rail travel, captures exactly what I like about travelling by train:

Just look out! The nearest fields go by in an arrow-swift stream, grass and plants run into each other – one has the feeling of standing outside the globe and watching it turn. It hurts one’s eyes to look for too long in the same direction; but if you look somewhat farther away, other things do not move any quicker than we see them move when we are driving at a good pace, and farther out on the horizon everything seems to stand still – one has a view and impression of the whole district.

This is precisely how one should travel through flat country. It is as though towns lie close together, now one, now another! The ordinary travellers on the by-roads seem to be stationary. Horses in front of carts lift their feet but seem to put them down again in the same place – and so we have gone by them.

Replace that horse and cart with a car, and that’s still what a train journey feels like. At other times, it’s evident how much things have changed – not least when Andersen talks to some of his fellow travellers about the most famous Dane in history. They agree this is Tycho Brahe; nowadays, of course, it would be Andersen himself. On the practical level, Andersen’s journey is hampered by ten days of quarantine, and in certain places on the Danube his boat has to be pulled upstream by teams of men on the shore. Earlier in the journey, he learns that there’s considerable unrest in Rumelia (now part of Romania), there are rumours that the couriers of the post from Belgrade to Constantinople have been murdered, and he wonders whether to cancel the Danube leg altogether. I got a distinct sense of a Europe that has always been in turmoil at one or more of its edges.

There are inevitably a few ‘man of his time’ moments, including a particularly eyebrow-raising visit to the slave market in Constantinople. Leaving those aside, however, it’s a very enjoyable read, and makes me think that I’d enjoy swapping travellers’ tales with Hans Christian Andersen.

This counts for Denmark in the #EU27project. And it’s my sixth book of the year/in the TBR20. 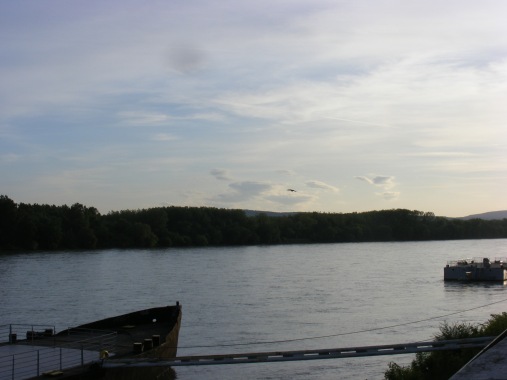 Having – somewhat to my surprise – filled an entire bingo card on the Indie Challenge last year, I had a vague idea of quitting while I was ahead, and not doing any reading challenges this year. Then I was messing around on Twitter and found a couple that looked a) interesting and b) manageable.

The other thing I’m trying to do is use Goodreads and LibraryThing more. I don’t do star ratings, which in my experience are pretty much meaningless, but I will be posting text reviews. We’ll see how it goes…