I like July. It’s my birthday month. There’s plenty of daylight. Granted, I am not particularly keen on the heat, but I much prefer it in July, when there’s the imminent prospect of a retreat to the coast and a difference of five degrees or so.

And even now, long after I left full-time education, there’s a glorious sense of end-of-termness about it. Holiday. I can do as I like.

Sometimes that takes more work than you’d think. Sometimes inertia and life in general and notions of extravagance combine to stop me doing as I like. Sometimes I have to make quite an effort, buy myself tickets so that I have to use them rather than talking myself out of going to whatever it was. Prompted by Julia Cameron’s concept of “artist dates” (not a term that comes naturally to me; I have renamed them “rendez-vous”, which strikes the right balance of glamour and self-mocking pretentiousness for me) I try to take myself out once a week for something entertaining or thought-provoking or indulgent.

It’s not as if there’s nothing out there. I work in London, where if it turns out the Somerstown People’s History Museum is closed (it always has been when I’ve tried to go to it, and it’s always open when I dash past on the way to catch my train home) I can look at an exhibition about cancer treatments at the Crick, or if I daren’t go to Gay’s The Word for fear of accidentally spending forty quid I can go to the British Library and stay away from the shop. I live in Ely, which has plenty going on in its own right and is only a quarter of an hour away from Cambridge to boot. I ought to be able to manage something every Thursday (or maybe Friday), even if it’s only an ice cream flavour I haven’t tried before (Ruby Violet in London; Hadi’s Gelato or Ely Fudge Company or Cherry Hill Chocolates in Ely). And when I do, I’m glad I did. I’ve learned something, or seen something differently, or tasted something new. If it hasn’t been fun (and it very often is) or moving, it will at least have been interesting.

July feels like a whole month of that. Somehow, it’s all much easier in July.

In the last few years – let’s say, six – I’ve been visiting some of the artists who take part in Cambridge Open Studios. The definition of ‘Cambridge’ turns out to be rather loose, and there are a dozen or so in Ely too. (One of them, Andrée Bowmer, made the lovely glass beads in the picture at the top of this post.) July 2022 was busier than either of the last two years, but I got around about half the artists in between my other weekend commitments.

Last week I was down on the Isle of Wight for Ventnor Fringe. I spend all year looking forward to Fringe and it always passes in a gorgeous haze of seeing things (art, shows) I might otherwise pass by and also lounging around at the Book Bus doing nothing. (This year I sold two books despite doing nothing.) It’s like people put on an entire arts festival just to celebrate my birthday. It’s brilliant. This year I went to two circuses, a drag show, an improvised Importance of Being Earnest, two small solo gigs (one in a barber shop, but not barbershop), no, hang on, I forgot about the vicar singing Dylan (very well), and a concert featuring a Scottish harp and a Finnish kantele.

But now Fringe is over and it’s August. I’m feeling a bit flat, I have to admit. Mind you, I was expecting to. But I’m also feeling the urge to read more, read more of the books that make me stop reading and look out of the window and think, go to the theatre more, and listen to more live music. I could do that. I could do all of that. The house is full of books, some of which I brought home from the Book Bus last week, or last year. There are free organ recitals at the cathedral every Sunday all summer… Last year I managed to get to all six Cambridge Shakespeare Festival shows. Well, this year I’ve missed all the July ones, but August’s still there, and I seem to have a lot more evenings free this month. And it’s still ice cream weather. 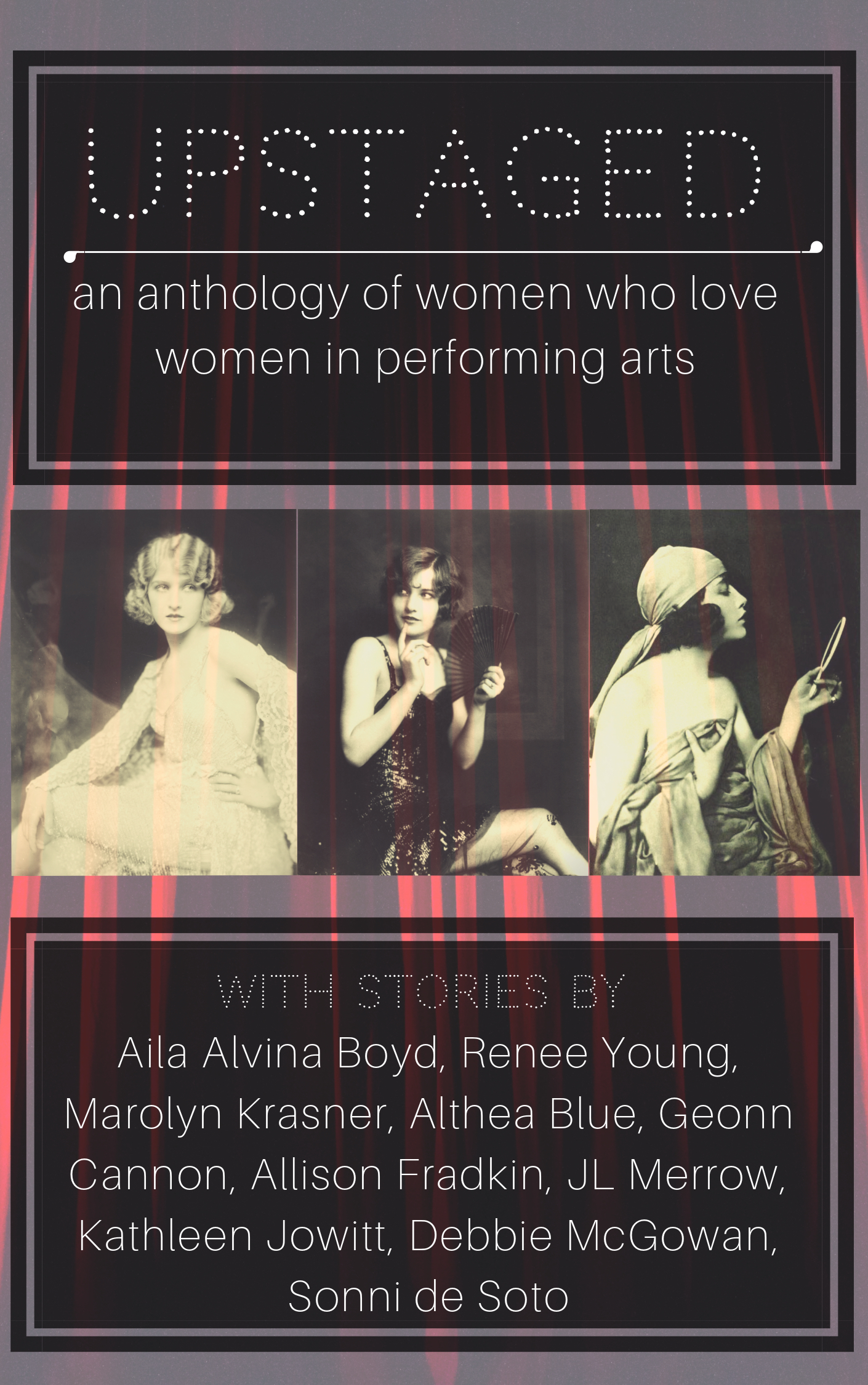 I’m very pleased to say that my story Prima Donna will be appearing in Supposed Crimes‘ upcoming anthology Upstaged.

My author copy came through yesterday, and I’m planning on spending the weekend reading it. I know what’s in my story, of course (opera, travesti, people jumping to conclusions and having to find their way back from them, and more opera) but the rest of the anthology is new to me, and it looks very intriguing…

Presenting the Revial of Jan, Aila Alvina Boyd – Years after blowing her Broadway debut, a former actress is convinced by the playwright to come out of retirement in order to revive the role that pushed her to the brink of insanity.

End of an Era, Althea Blue – In the years leading to the death of the silent film, many careers were ended prematurely. But do we really know everything there was to know about the silent stars who faded away?

Knife’s Edge, Geonn Cannon – Amid the insanity of the circus, Arlie and Ru must place absolute trust in each other. Arlie trusts that the blades will hit their intended target, while Ru trusts that Arlie won’t flinch. It would only take the smallest of mistakes to destroy that trust.

I Think I’m Gonna Like It Queer, Allison Fradkin – Theatre is an ensemble of inflection, projection, and rejection. So when 16-year-old Reyna—a performer who’s part prima donna, part dreamgirl next door—desires a duet with Melinda, the ingénue who plays her best friend, she can’t just run and tell that. Or even run and tell Melinda. But with the arrival of a triply threatening romantic rival, it’s five to places and ten to one that Reyna had better act on her feelings before the curtain closes on her chances.

London Lark, JL Merrow – Repairing a salvaged automaton becomes a labour of love for apprentice tinkerer Harriet Hodgkins. But the clockwork coquette is destined for resale, and Miss Pandora’s restoration will signal their separation—unless Hodgkins can engineer a more auspicious ending.

Prima Donna, Kathleen Jowitt – Everybody knows why the great Signora Valli left the Licorne opera company. Everybody, that is, except Monsieur Perret, who’s taken the brave – some would say foolish – decision to cast her opposite rising star Delphine Vincent-Leclerc in Rossini’s Tancredi. But what everybody knows is only half the story.

Oh No She Didn’t!, Debbie McGowan – Once upon a time, in the not so faraway land of small-town amateur dramatics, there lived a widow called Marcy and her beautiful, grown-up daughter, Ginny…

Rise or Shine, Sonni de Soto – What is Cadence Carrington to do? Her public life is colliding fast with her private persona, when her boss at the governor’s office sets his eye on shutting down the club she secretly performs burlesque at as featured dancer and femme fatale, Rebel Rouser. It’s only a matter of time before she’s found out, but the question is will she choose Cady’s steady, straight-laced life or will she choose to be the Rebel she knows she is at heart?

A. M. Leibowitz, the editor, says:

Upstaged will be released on 15 July and is available for pre-order now.