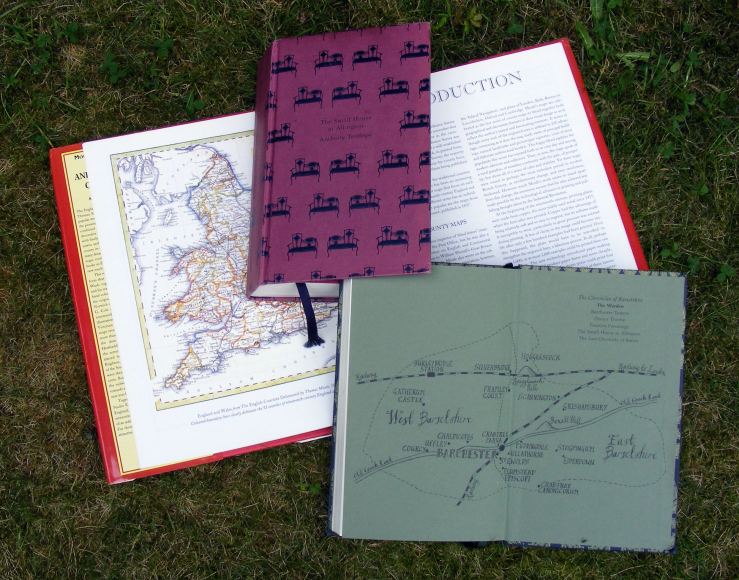 Of course it has to be Barchester. Other fictional Bs that come to mind are bit-part players: Borduria in Tintin, or Belsornia in the Chalet School series. But Barchester is one of the big ones. In terms of its significance, that is; the whole point of it is that it isn’t exactly a bit city.

Anthony Trollope is a little bit vague about the precise location of Barchester at the beginning of The Warden:

The Rev. Septimus Harding was, a few years since, a beneficed clergyman residing in the cathedral town of ––––; let us call it Barchester. Were we to name Wells or Salisbury, Exeter, Hereford, or Gloucester, it might be presumed that something personal was intended; and as this tale will refer mainly to the cathedral dignitaries of the town in question, we are anxious that no personality may be suspected. Let us presume that Barchester is a quiet town in the West of England, more remarkable for the beauty of its cathedral and the antiquity of its monuments than for any commercial prosperity; that the west end of Barchester is the cathedral close, and that the aristocracy of Barchester are the bishop, dean, and canons, with their respective wives and daughters.

But that doesn’t matter; it’s all we need to get the story going. In The Warden, it’s the personalities and politics that drive things: the close, the clergy, the councillors.  Trollope shows us a city that’s been minding its own business, getting along quite happily in its own way, sorting out or ignoring its petty troubles and corruptions – until someone comes in from outside and shakes it all up. And ‘outside’ means, of course, ‘London’. John Bold, the reformer, is a Barchester man, but he has been away to London and come back again with ideas:

His passion is the reform of all abuses; state abuses, church abuses, corporation abuses (he has got himself elected a town councillor of Barchester, and has so worried three consecutive mayors, that it became somewhat difficult to find a fourth), abuses in medical practice, and general abuses in the world at large.

In very broad terms, Barchester just has to not be London, and to be influenced by the events and people (Tom Towers, for example) that happen in or come from London. Nothing more than that is necessary, and, broadly speaking, that’s all we get. There is, however, one mention of a London terminal, and that terminal is Paddington.

As we work our way through the series, the location stabilises. We travel further afield around the city of Barchester. The internal geography of Barsetshire emerges, and is sufficiently consistent for the folk at Penguin to have produced the map on the endpapers of the Penguin Classics edition in the photograph. We learn in Framley Parsonage that Exeter exists in this universe, and so can’t be Barchester. Then, in The Small House at Allington, Johnny Eames also goes to London, and also arrives at Paddington. That puts Barchester firmly on the Great Western Railway, and certainly rules out Salisbury.

(These were library copies, and it took me a while to realise that the disintegrating Gothic tracery on the cover of The Warden was down to wear and tear, rather than a comment by the cover designer. One could certainly read some symbolic significance into that…)

In my head Barchester lies south of the Severn rather than on it, but that might just be because I first read The Warden when I was at university in Exeter. Hereford just feels far too far north. The real-life scandal that inspired the plot of The Warden happened, of course, at Winchester: Hiram’s Hospital bears a remarkable similarity to the hospital of St Cross (where, oddly enough, I was baptised rather more than a century later). The reader will notice that Winchester is not mentioned at the beginning of The Warden. Then again, it’s even more hassle to get to from Paddington than Salisbury.

Later in this series I’ll be examining other cathedral cities, and I’ll be speculating just what it is about the West of England that makes it so attractive to the constructors of fictional towns. In the meantime, however, it’s only right to salute Anthony Trollope and the one that, in many ways, started it all.

4 thoughts on “The Reader’s Gazetteer: B”