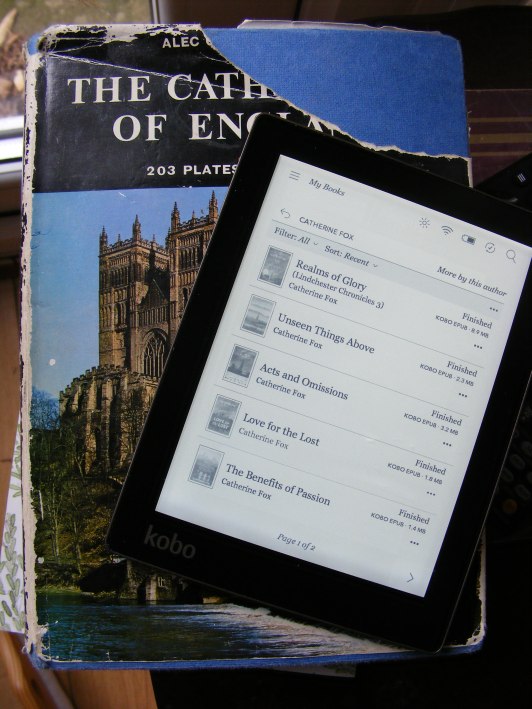 L takes us back to Britain and back to the ecclesiastical shenanigans novel in Catherine Fox’s Lindchester series.

Lindchester is explicitly in the same universe as Barchester, and it has a rather more explicit location:

The diocese of Lindchester is not large, squashed as it is between Lichfield to the south and Chester to the north; so don’t worry, we will not be travelling far.

This locates it, unusually for an ecclesiastical shenanigans novel, in the northern province. The Archbishop of Canterbury surely has quite enough to deal with in Barchester, Christminster, Starbridge and Torminster. It’s only fair that the Archbishop of York gets to fret about Lindchester’s problems.

Transport links? If you were starting in London, you’d get a train out of Euston. Euston is horrible. Maybe don’t start in London. Change at Crewe.

I’ve been using ‘Lindchester’ as shorthand for the locale in which the action happens. This is not limited to the town of Lindchester itself; it encompasses the whole diocese: Lindchester, Lindford, Cardingforth… (In fact, the narrator is scrupulous about not depicting anything that happens beyond the diocesan boundaries.)

Recently, I’ve been mulling over a hypothesis about fictional places, about the difference between Barchester and Ruritania (I know we haven’t got to the latter yet). And I’m not convinced it’s entirely down to geography. It’s not the difference between a city and a state – in fact, so many modern Ruritanias are so tiny that they basically are cities. I think it’s more to do with the way that the characters – and particularly the protagonist – interacts with the place.

If you’re the protagonist, Ruritania is the place you visit. You might have a longstanding connection with the place, your visit may have a disproportionate effect on the place, and you might very well get more than you bargained for on that visit, but you’re essentially an outsider. Barchester is the place where you live, very probably the place where you were born. In Barchester, you’re a part of the system, the whole complicated interconnected web of human relationships. You may well be able to effect change, but the system is something that has shaped you. You can’t just pass through it.

That’s because the place itself exists within a larger system, whether that’s political, religious, social, or any combination. It’s a system that the author suspects that many of their readers know well, might themselves exist within. Lindchester is a diocese within the Church of England. It operates in a similar way to any other diocese in the Church of England. Happy endings are very much a possibility, but they have to be negotiated within the constraints of the real-life system. The author has control of the fates of the individual characters, but they don’t mess around with the way we all know things work. That would be cheating. That would be far less satisfying.