Firstly, I’ve finally sorted myself out with a mailing list. This is solely for the purpose of letting people know when I’ve got new stories available – my between-times burblings will remain here on the blog. If you want to receive a very occasional email letting you know that I’ve got a new book out, or a piece in someone else’s podcast or anthology, and also to read subscriber-only short stories, sign up to my mailing list

Thirdly, this is the last week in which Speak Its Name and A Spoke In The Wheel are free.

A heads up for fans of f/f fiction: I Heart Lesfic is hosting a very large sale over the next few days. There are over one hundred books up there, by more than sixty authors. Enjoy!

The eagle-eyed will notice that none of those authors is me. This is because Amazon refuses to recognise that I set Speak Its Name to free (in ebook form, at least) several weeks ago. Lulu, Kobo, the iBookstore and Barnes & Noble have all caught on, though, so help yourself. (And if you’re dithering, here’s a recent review to help you make up your mind.)

We’re nearly there! The very last stop on the blog tour takes A Spoke in the Wheel to Books, Teacup and Reviews, where you can read an excerpt. Yesha will be reviewing the book later in the summer, as well.

Thank you to all the bloggers who have welcomed me – and thank you for joining me on the ride. It’s been fun!

It’s the penultimate day of the blog tour! Today I’ve taken A Spoke in the Wheel to Anne Bonny Book Reviews, where I’ve got a guest post on the subject of writing about disability.

And there’s a review at Odd Socks and Lollipops, where Jenni says,

Polly really made the novel for me, and the way in which she is written is so perfect. As a person who suffers with a chronic illness I could so relate to Polly and her experiences. It was so wonderful to see a disabled character written in the story and not have their narrative be there as a prop or so that they could be miraculously fixed. Instead Kathleen has created a wonderfully well developed character who highlighted both to Ben and the reader then challenge that every day life is for some.

You can read the whole review here.

Today the blog tour takes us to Literary Flits, where Stephanie says,

I read the whole book in a couple of days and actually felt quite bereft at the end when I closed the cover on these friends.

There are two stages on the blog tour today. First of all, take a look at Linda’s Book Bag and stay in with us – we’ve got cake!

Staying in with Kathleen Jowitt

And then head on down to Cornwall, where Emma has reviewed A Spoke in the Wheel at A Cornish Geek. She says,

When I received the PR for this book I was intrigued and drawn to the idea of second chances and redemption. Once I got stuck into the book, however, it was a different theme which kept me hooked: that of having your whole life mapped out and having it all taken away.

The blog tour continues! Today I’m talking to Joanna Victoria about the books I read, how I read them, and what happens to them afterwards. Read the Hooked on Books feature here.

Stage 8 of the blog tour for A Spoke in the Wheel, this time at Reflections of a Reader, where Leah says,

I don’t particularly have much interest in cycling but something about the blurb for this one drew me in and I am so glad that it did. I read this book in a couple of sittings, it was addictive and written excellently.

You can read the whole review here. 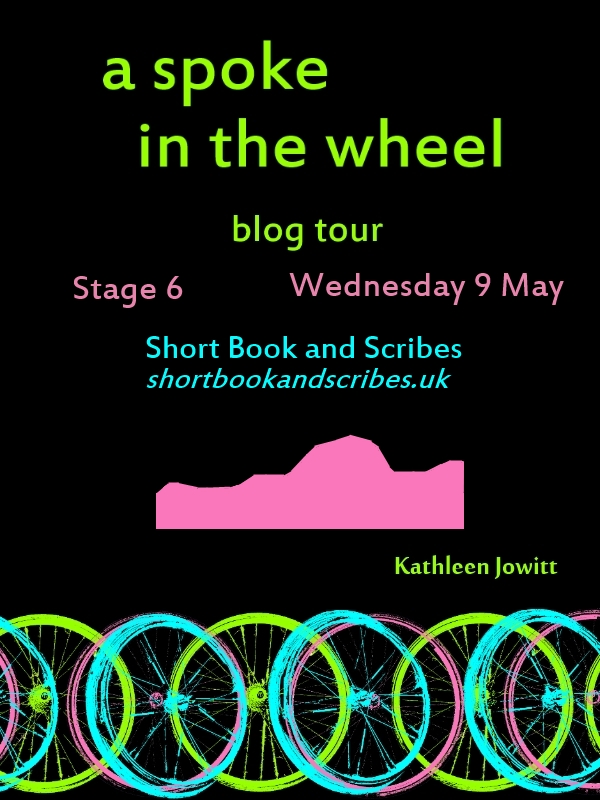 Today the blog tour takes us to Short Book and Scribes, where you can find both a review of A Spoke in the Wheel and a guest post by me, talking about the difficulty of fitting particular books (particularly mine) into particular genres.

… there isn’t that much actual cycling going on in this book, but it’s an excellent read about redemption and friendship.

I’ve never been able to pick a genre and stick with it. Sometimes I think the whole concept of genre is more trouble than it’s worth.

And you can read all of it here.

I’m looking forward to the release of Our Witness: the unheard stories of LGBT+ Christians later this month. As a contributor, I’ve had the chance to glance through the proofs of this collection of personal essays, and I’ve been impressed by the sheer breadth and depth, as well as the honesty, of the content.

Too often, the debate in the Church around gender and sexuality assumes that the question begins and ends with gay men. Lesbians are ignored. The rest of us might as well not exist. Even among allies, there’s a depressing tendency to write ‘LGBT’ in the first line and then revert to ‘gay’ for the remainder of the article/sermon/book, as if that covered everyone’s experience. Terms like ‘gay marriage’ are thrown around with, er, gay abandon. One gets the impression that the middle-aged cis white gay men are the only ones in the Church with any problems.

Some stories are not found in there: how could they be, when there are as many stories as there are LGBT+ Christians? Some will appear in the US version, which is coming next year. Others, of course, won’t. But there are more stories in here than I have ever seen before.

Our Witness: the unheard stories of LGBT+ Christians is published on 29 October by Darton Longman and Todd.